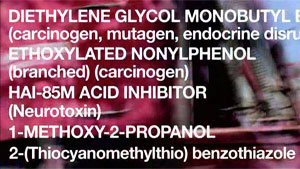 Could this be the fracking industry’s Silent Spring moment? One of the most alarming aspects of fracking is how little we understand the long term risks of the technology.

As the shale boom explodes in the US, concerns about the health and environmental impacts have largely been ignored or brushed aside in the rush to frack.

For years the fracking industry has hidden behind the cloak of “commercial confidentiality” when people have tried to analyse what is in fracking fluid which the industry injects under pressure to force open the rock to extract oil or gas.

As scientists study the impact of this controversial technology, the wider picture is slowly becoming clearer. But science takes time.  However slowly and surely the scientists are catching up with the industry.

Last year the alarm bells started ringing when scientists discovered that some 100 of the ingredients analysed in fracking fluids were known or suspected endocrine disrupting chemicals.

Earlier this month, a group of American biologists, writing in Frontiers in Ecology and the Environment, emphasised the need for more research into the environmental impact of chemical contamination from fracking.

“We know very little about how shale gas production is affecting plants and wildlife,” said one of those authors, Sara Souther, a conservation fellow in the Department of Botany at the University of Wisconsin-Madison. “And in particular, there is a lack of accessible and reliable information on spills, wastewater disposal and the chemistry of fracturing fluids.”

One major concern is the lack of disclosure of the chemicals in the fracking fluids. “There are hundreds of other chemicals that are being used for fracking, and thousands of wells in operation,” said co-author of the paper, Kimberly Terrell, a wildlife biologist for the Smithsonian Conservation Biology Institute. “So understanding the health risks that are associated with that is challenging enough, but when you don’t have access to basic chemical information, it’s really impossible to accurately predict these risks.”

And last week, scientists presented research on the contents of the fracking fluids to the American Chemical Society. William Stringfellow from the Lawrence Berkeley National Laboratory and University of the Pacific scoured databases and reports to compile a list of substances commonly used in fracking.

And what his team found should concern any community facing fracking. They concluded that, of the 200 commonly used compounds, very little is known about the potential health risks of about one-third of the chemicals, with basically nothing known about their toxicity or physical and chemical properties.

Of the ones that are known about eight are toxic to mammals.

His team found that most fracking compounds will require treatment before being released. And the scientists identified eight substances, including biocides which the scientists believe raise “red flags”. These are particularly toxic to mammals. Others are toxic to marine life.

“There are a number of chemicals, like corrosion inhibitors and biocides in particular, that are being used in reasonably high concentrations that potentially could have adverse effects,” Stringfellow says. “Biocides, for example, are designed to kill bacteria — it’s not a benign material.”

How many red flags will be raised before the regulators take action to find out what is actually being pumped underground? Maybe they should read Silent Spring, and start asking some pertinent and urgent questions.