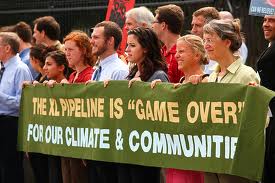 The US State Department has been severely criticized for many aspects of its environmental impact study of the controversial Keystone XL (KXL) pipeline. Much of the criticism has centered around the conclusion that the pipeline would have a negligible impact on climate change.

The State Department’s argument is that the tar sands would be exploited whether KXL was built or not. “At the end of the day, we are going to be consuming that oil,” former Secretary of the Interior Ken Salazar has said.

Back in April last year, Oil Change International and other environmental organizations released a report that showed how flawed that argument is.

The report, entitled “Cooking the Books: How The State Department Analysis Ignores The True Climate Impact of the Keystone XL Pipeline,” argued that the Keystone XL would “carry and emit at least 181 million metric tons of carbon dioxide equivalent (CO2e) each year”. It pointed out that this is a equivalent to the tailpipe emissions from more than 37.7 million cars.

Now a new scientific study also argues that the State Department has seriously underestimated the climate emissions from KXL. The study, published in the journal Nature Climate Change, concludes that KXL could produce four times more greenhouse gases than the State Department calculated.

The analysis suggests that building Keystone XL would increase oil supply, lower global oil prices and stimulate an increase in consumption of up to 0.6 barrels per barrel of pipeline capacity.  They calculate that this would increase emissions by 121 million tons a year.

“There is no indication that the State Department took the market implication into consideration,” said lead author Peter Erickson. “This is our analysis, and we believe that it could have the greatest emissions impact of the pipeline”.

He added that our “key message is that the oil market impacts of Keystone XL could be significant – and have an emissions impact four times greater than the US State Department found.”

Their analysis is backed by other international researchers: “The math works out. The model is simple and straightforward,” says Nico Bauer of the Potsdam Institute for Climate Impact Research in Germany.

The study should put further pressure on President Obama, who has stated that he will only approve KXL if the pipeline does not “significantly exacerbate”  climate change.

In the high-end political and economic stakes over the pipeline, it is not surprising, therefore that the Canadian government has been quick to try and rubbish the report. The Harper Government says the study is based on “false assumptions”.