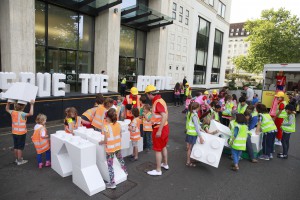 Earlier this week in London, in a novel action which some are calling a “playtest”, over 50 young children gathered outside Shell’s London headquarters to protest against the oil giant’s Arctic drilling programme and its controversial collaboration with the iconic children’s toy-maker, Lego.

The children built three large Lego Arctic animals to protest against the use of Shell’s logo on Lego products, including a polar bear, walrus and snowy owl.

The London protest follows a striking video which Greenpeace has posted online called “Lego: Everything is NOT Awesome,” which has been viewed over five million times, and led to some 700,000 people signing a petition calling for Lego to cut its ties with Shell.

Elena Polisano, the Arctic campaigner at Greenpeace, claimed Shell’s association with Lego is helping the oil giant greenwash its operations in the Arctic: “Lego is trusted by parents and kids around the world so if Lego says Shell is OK, people believe it. But Shell is responsible for huge climate-wreaking carbon impacts and now it’s determined to drill in the Arctic.”

Shell’s continuing commitment to Arctic drilling, especially in the United States, is reflected in a new analysis undertaken by US conservation group Oceana. It shows that although other companies may have relinquished licences to drill in the Arctic, Shell remains committed to drilling in the region.

Since 2007, despite spending tens of thousands of dollars on licenses, oil companies have ceded the rights to drill on roughly 584,000 acres of the 1.3 million acres of licenses they had acquired in the Beaufort Sea, which is along Alaska’s North East coast.

But not Shell. All but seven of the 141 still-active oil and gas leases in the Beaufort Sea are now partly or completely held by Shell.

“Nearly half of the leases purchased in the 2003 to 2007 lease sales have been allowed to expire as company after company decides to forgo or delay activities in the U.S. Arctic Ocean,” argues Susan Murray, Oceana’s Pacific deputy vice president.

Aside from Shell and BP, which has operations close to shore, only ENI and Repsol hold active Beaufort Sea leases, about 23,861 acres’ worth.

So despite the protests and the damage to its international reputation, Shell belligerently remains committed to drilling in the Arctic. No matter the cost.