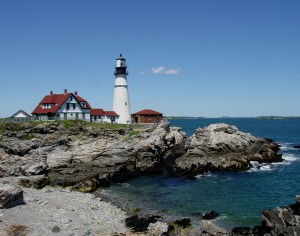 Big Oil has always been a bad, bad loser.

And it is therefore no surprise that it has threatened to sue a small coastal city in Maine which on Monday night struck an historical blow against the industry by banning the export of tar sands from its harbour.

The decision by South Portland to approve, by 6-1, to ban tar sands exports, has catapulted this small coastal town which is famous for its scenic light-houses against the collective might of the oil industry and Canadian government.

The decision is another blow to the tar sands industry which is desperate to find ways of getting its dirty carbon-munching oil to market.

It effectively bars any attempt by the oil industry to bring oil from Alberta to the city’s port, the second-largest oil terminal on the east coast of the US.

The move has ramifications for the tar sands industry, because it was planning to reverse the flow of the Portland-Montreal pipeline to carry tar sands to the coast.

South Portland Mayor Jerry Jalbert told Reuters the vote was an exercise in local democracy. “From the perspective of a locally elected official, it’s a simple issue. People fear this product could be damaging to the community, and they have asked us to act.”

Hundreds of supporters, wearing light blue T-shirts had packed into the hall where the vote was taking place. They were part of the so-called “Clear Skies Ordinance” worried about local spills and the impact of the tar sands on climate change.

After the vote, activists were ecstatic, standing to applause the local councillors. “This victory sends an important message to communities around the country,” said Lisa Pohlmann, executive director of the Natural Resources Council of Maine. “It shows that we can stand up against a dirty, toxic form of energy, and that it’s not inevitable.”

“We may be a small city, but, boy, we’ve done a big thing,” added Mary-Jane Ferrier, spokeswoman for Protect South Portland, who led the campaign. “We know it may not be over yet, and we’re committed to defend this victory from oil industry attacks.”

It is only a matter of time before those legal attacks start coming. The oil industry’s main lobbying organisation and attack-dog, the American Petroleum Institute, earlier this year had warned South Portland officials they would “face strong legal challenges,” if they voted to ban oil exports.

Yesterday, they were said to be considering their options. Tom Hardison, vice president of the company that runs the pipeline, said the vote was “against jobs, energy and the waterfront,” and called it a “rush to judgment.”

One local energy association has also claimed that “The fight is not over.”