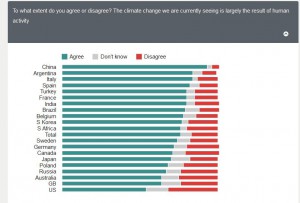 Last week the polling company, Ipsos-Mori, published its first ever Global Trends Report, which examined our attitudes to a whole host of topics such as technology, privacy, marriage, migration, health, globalisation, inequality, science and the environment.

The results that grabbed the headlines were that many people believe they spend too much time in front of their computers. However, the pollsters, who quizzed over 16,000 participants in 20 countries, also asked a couple of pertinent questions about climate change.

Overall just over three quarters of all respondents – some 76 per cent – agreed. Surprisingly, topping the list was China, where a whopping 92 per cent of respondents said they agreed with the statement. They were followed by Argentina, Italy, Spain and Turkey in descending order.

So according to the poll, the US still leads internationally in climate denial. Before you take any solace that over half Americans think that climate change is being caused by human activity, there was another question relating to global warming.

The second question asked whether respondents wondered whether the “climate change we are currently seeing is a natural phenomenon that happens from time to time”.

Coming top of the list were India and US, both on 52 per cent, closely followed by China and Great Britain again.

Although the Chinese response is an anomaly to its high percentage in the first question, the American response to both questions is consistent.

The bottom line is that about half Americans believe that climate change is natural and nothing to do with human activity.

If nothing else this shows the success of the climate denial movement in the US, which is funded by Big Oil, first by Exxon and more latterly, the Koch Brothers. This denial has been propagated by numerous neo-liberal think tanks, led by groups such as the Heartland Institute.

It is worth remembering that it is also nearly 20 years since the landmark Intergovernmental Panel on Climate Change report in 1995, which concluded that there was a discernable human influence on climate.

Since then the science has only strengthened and so have the impacts of climate change, with global warming now estimated to cost over a trillion dollars a year.

The science is overwhelming: Of the 12,000 scientific studies on climate change published in the last 20 years, ninety-seven per cent of those that expressed a view on the issue “endorsed the consensus position that humans are causing climate change”.

So a vast majority of Americans ignore the science and evidence that climate change is happening now around them.

As if to make the point, yesterday the National Oceanic and Atmospheric Administration announced that last month was the warmest June since records began. It followed the hottest May on record.  Last month, heat records were broken on every continent apart from Antarctica, especially in New Zealand, northern South America, Greenland, central Africa and southern Asia.

The Washington Post writes that “these reports are feeding anticipation that 2014 could become the warmest year on record.”

Despite this, half of Americans remain firmly in denial.