Cashing in on All of the Above: U.S. Fossil Fuel Production Subsidies under Obama 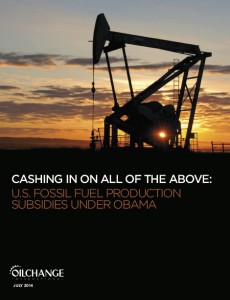 A new report by Oil Change International, Cashing in on All of the Above: U.S. Fossil Fuel Production Subsidies under Obama, demonstrates the huge and growing amount of subsidies going to the fossil fuel industry in the U.S. every year. In 2013, the U.S. federal and state governments gave away $21.6 billion in subsidies for oil, gas, and coal exploration and production.

The value of fossil fuel exploration and production subsidies from the federal government have increased by 45 percent since President Obama took office in 2009 – from $12.7 billion to a current total of $18.5 billion – a side effect of his Administration’s “All of the Above” energy policy that promotes the U.S. oil and gas boom and amounts to nothing less than climate denial. President Obama has repeatedly tried to repeal some of the most egregious of these subsidies, but these attempts have been blocked by a U.S. Congress that has been bought out by campaign finance and lobbying expenditures from the fossil fuel industry.

In addition to exploration and production subsidies to oil, gas, and coal companies, the U.S. government also provides billions of dollars of additional support to the fossil fuel industry to lower the cost of fossil fuels to consumers, finance fossil fuel projects overseas, and to protect U.S. oil interests abroad with the military. Finally, while the fossil fuel industry enjoys record profits, U.S, taxpayers will pay the bill for external health and environmental costs from local pollution and climate change impacts.