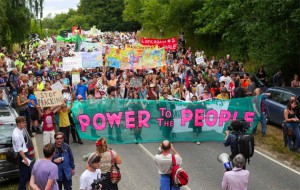 The percentage of people who support fracking is now below 50 per cent in both the UK and US and is continuing to decline.  Conversely the amount of people opposed to the controversial technique continues to grow.

In the US, surveys undertaken by the Pew Research Centre show that last year the number of people nationally who supported fracking fell from 48 per cent in March to 44 per cent in September last year.

Likewise the number of people who opposed fracking jumped from 38 per cent to 49 per cent, over the same time period.

Regionally, the results are interesting too. In the Northeast of the US the opposition to fracking only increased from 46 to 51 per cent last year, whereas in the South it rose from 34 to 46 per cent, the Midwest it jumped from 32 to 48 per cent, and the West it increased from 44 to 55 per cent.

If these figures continue to rise, it could cause serious problems for the fracking revolution in the US.

Meanwhile over in the UK, the number of people in favour of fracking has fallen below 50% for the first time.

Researchers from the University of Nottingham found that just 49.8% of the British population are in favour of the controversial technique. The figure has fallen sharply since 2012, when 58 per cent were supportive.

The report concludes that “the May 2014 survey confirms that the turn against fracking for shale gas in the UK has deepened”.

It credits the anti-fracking protests at Balcombe, in the rolling countryside of West Sussex in the South East of the country, which made international headlines, as one of the reasons for the increase in fracking opposition. Worryingly for politicians is that younger people were generally against the technology.

Such has been the swing against the technology that the Professor who undertook the survey did not believe the results, at first. The Professor, Sarah O’Hara, told the BBC that the results were surprising:

“Previously the polls had shown a steady trend towards greater understanding of the technology and greater acceptance, but this has gone into reverse and now support is the lowest overall since we started the poll”, she said.

Already, senior Conservatives are warning that fracking may cost them votes in the upcoming European elections, which are to be held this week.

Lord Howell, the father-in-law of the British Chancellor, who last year caused outrage saying that fracking should only happen in the “desolate” North, recently made the headlines again by warning that when “Ministers open their mouths to claim that fracking must start everywhere around Britain, and not just in carefully selected and remote (derelict) areas, they lose thousands of Tory votes.”

Meanwhile, Britain’s only Green MP, who took part in the Balcombe protests, Caroline Lucas, said that anti-fracking sentiment was helping the Greens politically.

“If the [government] thinks onshore wind farms are unpopular because of their landscape intrusion, then they’ve seen nothing yet,” she told the Financial Times. “[They] have massively underestimated how much there will be a backlash.”