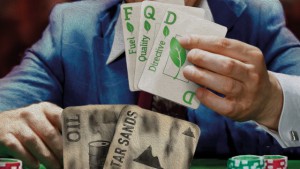 And so another year passes without any political resolution concerning the European Union’s landmark Fuel Quality Directive (FQD), which labels the dirty tar sands as more carbon intensive than conventional fuels.

But now over 50 leading European and American scientists have written to the European Commission president, Jose Manuel Barroso, urging him to implement the Directive in defiance of the intense lobbying from the Canadians and the Americans.

The scientists include professors from Harvard, Stanford and Columbia in the United States, Aberdeen and Edinburgh in Scotland, University College in Ireland and Heidelberg in Germany.

Their letter raises the point of unburnable carbon and the simple issue that we cannot afford to burn all of the tar sands.

“We live in an era during which it has become clear that we cannot burn all of the fossil fuels without causing dangerous climate change,” wrote the scientists.

The Directive has been temporarily shelved whilst concurrent trade talks have been held between the EU and Canada.

But what is worse is that even bigger trade talks – called the Transatlantic Trade and Investment Partnership (TTIP) – between the United States and Europe could permanently scupper the Directive.

In the US, a group of Democratic congressmen from both the Senate and the House have expressed concern that American trade negotiators are trying to undermine the FQD.

The letter from 21 Senators and House members cites “troubling” reports that America is trying to undermine the Directive as part of the negations over the TTIP.

In a letter led by Representative Henry A. Waxman and Senator Sheldon Whitehouse, co-chairs of the Bicameral Task Force on Climate Change, the lawmakers ask whether the US Trade Representative (USTR), Michael Froman, has been pressing the European Commission to alter its proposed treatment of tar sands in the Directive.

Froman has publicly expressed unease about the FQD’s “lack of adequate transparency and public participation in the process” and said that the U.S. is seeking “improvements in the EU’s overall regulatory practices” through the TTIP process.

The lawmakers wrote that: “If these reports are accurate, USTR’s actions could undercut the EU’s commendable goal of reducing greenhouse gas emissions in its transportation sectors”.

They added that “This would be contrary to the principles of the Obama Administration’s Climate Action Plan and would reflect a short-sighted view of the United States’ economic interests.  Given the importance of the issues at stake, we believe clarification of USTR’s position is necessary.”

Friends of the Earth argues that the TTIP could end up with “a massive weakening of standards and regulations which are for the protection of people and our environment.”

They are calling for an end to the secrecy of the negotiations before it is too late.