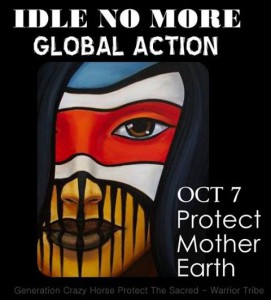 From Canada to Honolulu, from New York to London over fifty events are taking place today in support of the Canadian indigenous rights movement, Idle No More’s global day of action, entitled #Oct7Proclaim!

The date is hugely significant. October 7, 1763, marked the signing of the British Royal Proclamation which was an historic document that legally mandated Canada to recognise Indigenous land rights.

So some 250 years since the Proclamation, Idle No More is calling for “all peoples to raise (y)our voices and take action in support of:– Our Land — Our Water — Our Bodies — Our Stories — Our Future — Indigenous Sovereignty.”

In a statement Idle No More says that “We must collectively send a clear message that our movement will not stop intervening in Canada’s attempts to conduct business as usual.”

In Canada, planned events range from a flash-mob dance in Saskatoon, a picnic in Toronto, and a peaceful protest on Parliament Hill in Ottawa.

As the original document was signed by George III, one demonstration has already taken place in London by his statute on Pall Mall.

Today also sees the start of a whirl-wind tour by Professor James Anaya, the UN Special Rapporteur on the rights of indigenous peoples, who begins his first visit to Canada. Surely to be top of lists of concern are growing conflicts between Canada’s indigenous community and resource exploitation projects, such as mining and the tar sands.

Indigenous activists have also been visiting London warning about the dangers of the tar sands and Canadian attempts to undermine the Fuel Quality Directive (FQD). Last Thursday, George Poitras, a former chief of the Mikisew Cree First Nation, who lives in Fort Chipewyan, northern Alberta, was in London to push for the labelling of the tar sands as a dirty fuel in the FQD.

At a meeting with Norman Baker, the British Minister in charge of the FQD at the Department of Transport, George told him that his community is feeling impacts on their water supplies, food sources, health, and way of life. Baker’s response was said to be “disappointing”.

George then spoke at a public meeting in the British Parliament. It was chaired by Simon Hughes, the Deputy Leader of the Liberal Democrats, who is ironically a close friend of Baker’s. Hughes once said that the tar sands extraction should be banned “in the same way they came together to ban land mines, blood diamonds and cluster bombs”. Hughes has since been more muted on the issue since the Liberal Democrats have been in Coalition Government.

“This is not the Canada you knew,” George told the audience. ‘Many civil liberties are being stripped away. It is becoming a petrostate.’

And this is where Professor James Anaya could be crucial. Canada wants to be becomes the world’s leading petrostate, trampling the rights of its indigenous communities along the way. For once the UN has the opportunity to step in and really fight and help those most in need: Canada’s first nations who are on the front line of tar sands extraction.

Some 250 years after the British Royal Proclamation, come on, Professor James Anaya and the UN, the time is to be Idle No More.