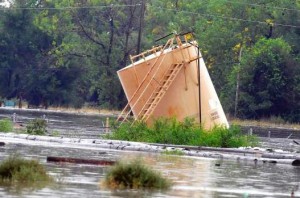 There may be only one news story across America right now,  as the government shuts down non-essential services due to the political gridlock suffocating Washington.

But in the middle of the political stalemate, two House Democrats have urged Congress to investigate the on-going pollution crisis caused by the massive flooding of fracking wells in Colorado.

“Not only have my constituents been dealing with damage to their homes, schools, and roads, they are increasingly concerned about the toxic spills that have occurred from the flooding of nearly 1,900 fracking wells in Colorado,” stated Polis. “Congress must deal with this issue to ensure that natural disasters do not also become public health disasters.”

“This is not a partisan issue,” added DeFazio. “People dealing with aftermath of a catastrophic natural disaster don’t need to worry that their health is at risk because of oil and gas spills. Congress needs to hold a hearing so we can assess the consequences of this flood and figure how to bring relief to the affected communities.”

And we still do not know how much oil has been spilt or the extent of the damage. Yesterday, the Colorado Oil and Gas Conservation Commission issued its latest update arguing that the agency is still tracking 14 notable spills, up 2 from the previous week. This brings the cumulative total of “notable releases” of oil to 43,764 gallons.

The inspectors have still only covered 70 per cent of the flood affected area, so more spills might be found.

In light of the spills, some environmental groups are now calling for fracking to be banned on flood plains. Gary Wockner of Clean Water Action told Al Jazeera, “We need to talk about banning drilling and fracking in flood plains” he said adding that drilling should be at least a mile from water courses, rather than 50 or so feet.

This point has not been lost on a local Colorado politician from Routt County, Diane Mitsch Bush who is also arguing that there needs to be new rules on the distance drilling is from rivers and streams.

Current rules are meant to prohibit drilling within 300 feet of streams that provides municipal drinking water, but that does not apply to streams and rivers in general.

Her move was welcomed be conservations groups.“It is only good, common sense that oil and gas drilling shouldn’t happen close to our homes and schools, or our lakes, streams, and important riparian areas,” the Executive Director of Conservation Colorado, Pete Maysmith said: “As we rebuild, we need stronger safeguards in place to help avoid future damage to our communities, water, and wildlife habitat.”