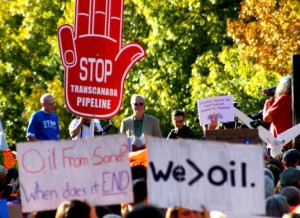 On his visit to Washington yesterday, Canada’s Natural Resources Minister Joe Oliver had a pretty blunt message to the Americans: the dirty tar sands will be continued to be developed regardless of whether the highly controversial Keystone XL pipeline is approved or not.

He also unwittingly undermined his own lobbying effort: if the tar sands were easy to develop without KXL, then why has Canada been spending tens of millions of dollars on one of the most intense political lobbying effort to try and persuade the Obama Administration to say yes to the pipeline?

Despite this obvious discrepancy, Oliver said: “If Keystone wasn’t developed there would effectively be as much development of the oilsands in any case, as a result of the use of rail and as the result of export of the crude to other markets.”

He added that there was a “strategic need” for Canada to diversify its energy export markets. “Canada will continue to aggressively pursue new markets for oil exports to ensure the Canadian energy industry can take advantage of opportunities in some of the world’s fasted growing economies.”

However, Oliver’s argument was at least backed up by one analyst who was quoted in the Canadian press yesterday. Phil Skolnick, a New York-based analyst at Canaccord Genuity, published a report arguing that a combination of growing oil-by-rail capacity and other new pipelines is increasingly providing alternatives to KXL.

Skolnick is quoted as saying: “The oil will find a way down, and if Keystone gets delayed, at the minimum you still don’t have a pinch point because this rail capacity should be built by that time anyway”.

He added: “The main message is that Keystone XL, and the fear of rejection, has been the overhang on these [Canadian energy] stocks. Because of all the rail advances that are coming on, that should no longer be a fear”.

Even the oil industry has dismissed comments like that. A spokesperson for Valero Energy Corp, which runs refineries in the United States, retorted that the idea that the industry did not need KXL was “overblown.”

TransCanada argued that Skolnick’s report did not address the industry’s long term need for KXL “because the cost of moving oil by pipe is about half of what it is to move by rail – let alone how much safer it is to move oil by pipeline.”

Despite the fact that Canada says it does not need the KXL, Oliver offered political sweeteners to the Americans yesterday to try and make it easier for Obama to say yes to the pipeline. Olivier said that the Canadians were keen to move Canada-U.S. collaboration on the energy policy front to “a higher level” and they were willing to do more to fight climate change.

“We stand ready and eager to work with the Americans on a whole host of issues, including the development of our non-conventional resources. That’s an important initiative,” Oliver said.

But once again this looks like more desperate lobbying by the Canadians as they try to seek approval of KXL.  As the Wall Street Journal points out “Policy analysts have warned Canada’s failure to date to produce carbon emissions rules for the energy sector could affect how the White House rules on Keystone XL.”

But what Oliver does not seem to understand is that Canada cannot join the international fight against climate change and “have the social license to continue to develop our resources” at the same time.

The two are totally incompatible and I am sure privately they know this. Otherwise they are in denial of the overwhelming evidence on oil and climate. And in that sense, they are no better than climate sceptics or deniers.