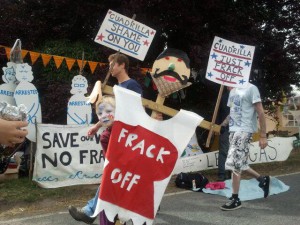 One of the most influential economists of his generation and author of a respected review of the financial implications of climate change, Lord Stern, has rebuked the British Prime Minister David Cameron over his claim that fracking will bring down gas prices in the UK.

Anyone who knows anything about the oil and gas market knows it is an international market and the UK does not live in isolation.

External events – like a military strike on Syria – could send the price of oil rocketing. Even President Obama securing the support of key Republicans for military action against Syria has sent the price of oil upwards, and that is before any strike has begun.

And now Lord Stern has given David Cameron a simple lesson in the international economics of the oil and gas industry. In an interview with the Independent newspaper, he dismissed Cameron’s claims that a fracking boom “has real potential to drive energy bills down” as “baseless economics.”

Stern said: “I do think it’s a bit odd to say you know that it will bring the price of gas down. That doesn’t look like sound economics to me. It’s baseless economics.”

Stern also rebuked the Government for allowing fracking without adequately analysing the risks. “There are major questions around fracking and those questions ought to be explored. We’ve not had a proper discussion on these serious issues,” said Lord Stern.

Stern’s warning comes as it has come to light that the drilling company that has caused widespread anti-fracking protests in Sussex, Cuadrilla, has put its drilling operations on hold due to “legal ambiguity” over its current licence and its failure to set out the full extent of its horizontal drilling plans.

The company has so far drilled a 3,000ft vertical well at the site and had begun drilling a well horizontally for 2,000ft. However, there is uncertainty whether it has permission for the horizontal drilling.

However, in a deeply undemocratic and cynical move, the Government plans to reform planning rules to end people’s right to be notified about plans to drill for gas and oil beneath their homes and land.

The move caused outrage amongst campaigners. Friends of the Earth’s Head of Campaigns Andrew Pendleton said: “It’s astonishing that Ministers want to end people’s right to be notified about plans to drill for gas and oil under their homes.”

He added: “It’s little wonder communities don’t trust the Government over fracking when their rights are so clearly being bulldozed aside to smooth the path for the big fracking firms.”

The British government bulldozing peoples’ rights in the interests of big business – where have I heard that one before?