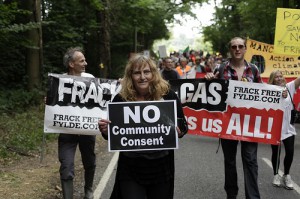 As the protests against fracking in the UK continue, the Netherlands is the latest European country to signal that it is set to press ahead with the controversial technique.

According to this morning’s Financial Times, the country has moved closer to approving exploitation of fracking after a government report concluded that the ecological risks were “manageable”.

A report by several leading engineering consultancies argues that the risk of groundwater pollution is “very small”, due, in part, to the fact that the country’s shale gas reserves are much deeper than those in the US, at three to four kilometres rather than 1.5 kilometres below ground.

Up until now the Dutch Coalition government was split over the issue, with the centre-right Liberal party in favour, whereas the centre-left Labour party were against until fracking could be proven safe.

Although a final decision is not expected until next year, the Government is optimistic that the report will allay people’s concerns. However a majority of Dutch are against the technique. A poll in May found 44 per cent against fracking to 35 per cent in favour.

Despite this, Henk Kamp, the Liberal minister of economic affairs argues that “If shale gas can be exploited in a responsible fashion in the Netherlands, and if we have it in economically interesting quantities, then we should seriously consider doing so.”

Critics like Greenpeace argue that, like the UK, the Netherlands is a densely populated country and there will be problems if the country approves fracking.

Indeed, Dutch parliamentarians would be wise to look across the English Channel to the on-going anti-fracking protests in Sussex in the UK.

Despite the British Prime Minister, David Cameron, being enthusiastically in favour of the technique, some members of his party have now begun to break ranks. George Hollingbery, a parliamentary private secretary to the country’s Home Secretary, has warned he will be  “manning the barricades” if there is any danger to water supplies from fracking.

Mr Hollingbery, the MP for Meon Valley in Hampshire, warned fracking could be “disastrous” due to the region’s fragile water supply. He is the first senior Conservative to oppose the technique.

Other MPs have gone further in their opposition to fracking. Earlier this month, former Green Party leader and Brighton Pavilion MP, Caroline Lucas, was arrested during the Reclaim the Power camp organised by the campaign group No Dash For Gas.

Lucas said at the time of her arrest: “Despite the opposition to fracking being abundantly clear, the government has completely ignored the views of those they are supposed to represent. When the democratic deficit is so enormous, people are left with very little option but to take peaceful, non-violent direct action.”