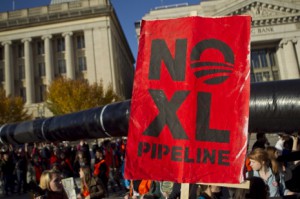 As the Obama Administration grapples with whether to approve the Keystone XL, its proponents are exploiting every single emergency and international incident to try and promote the pipeline.

Even though the dead are still being counted in the recent Quebec crude oil train fire, KXL’s supporters have been quick to promote the tragedy arguing that the disaster proves that transporting oil by pipeline is safer.

The smoke from the disaster was still in the air when Diana Furchtgott-Roth, a senior fellow at the Exxon- and Koch-funded Manhattan Institute wrote that,

“After Saturday’s tragedy in Lac-Mégantic, Que., it is time to speed up the approval of new pipeline construction in North America. Pipelines are the safest way of transporting oil and natural gas, and we need more of them, without delay.”

As Kevin Grandia at DeSmogBlog rightly pointed out: “using the tragedy still unfolding in Quebec to argue for more oil pipelines is a whole new level of low.”

Keith Stewart, the climate and energy coordinator at Greenpeace in Toronto, argues that the owner of Keystone XL TransCanada is going to try to use the Quebec accident “to boost their case but it’s a real double-edged sword for them. Pipelines and rail both have safety issues and both can be a hell of a lot safer than they are today.”

In fact, as Greenpeace point out, the Quebec disaster does not proves that pipelines are safe, just that transporting oil by rail is inherently dangerous. Moreover the Canadian federal government has apparently ignored several warnings about the safety of transporting oil by rail. The Federal government’s own safety officials told them nine years ago that 80 percent of the rail tanker fleet in Canada was unsafe for carrying oil.

Not content with ambulance chasing in Canada, Keystone’s supporters have also attempted to use the saga over the offer by Venezuela to offer asylum to the American whistleblower Edward Snowden, according to an article in the Hill.

It has not escaped attention that the KXL would carry tar sands to America’s Gulf Coast refiners which currently process heavy crudes imported from Venezuela. So approving Keystone XL would, in theory, displace Venezuelan imports.

The Republican Congressman Lee Terry from Nebraska, a vehement supporter of the KXL, has said, for example, that “The offer of asylum to Snowden is exactly why it makes more sense to be entering into an agreement and strengthening our relationship with our country’s number one trading partner.”

Others have made similar statements. The Institute for Energy Research, a right wing advocacy group, has also argued that “the president’s refusal to permit the Keystone XL pipeline has made America weaker, with the strange reality that we are yet dependent on Venezuela, sending billions of dollars to that country for oil, and ostensibly funding the flight of Edward Snowden.”

(Watch this space tomorrow for more on Keystone and Venezuela…-Ed.)

We can expect more comments like these are KXL’s supporters use every political and current affairs development to push for the pipeline.

Meanwhile it has transpired we do not even know the exact route of KXL. Which begs the simple question: how can the State Department approve something when it does not even know where it will go?