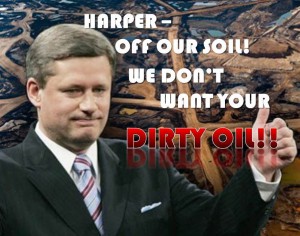 Next week, the world’s most powerful nations will meet for the G8 summit in Northern Ireland.

And this Thursday, en route to the summit, Canada’s Prime Minister will stop-over in London. Whilst there, he will be given the privilege of addressing both Houses of Parliament.

In doing so, he will become the first Canadian Prime Minister in nearly 70 years to be given the honour.

Harper will join an exclusive list of world leaders, such as Aung San Suu Kyi, Nelson Mandela, Pope Benedict XVI and the Dalai Lama, who have done so.

He will also participate in a private meeting with the Queen and hold a bilateral meeting with British Prime Minister David Cameron.

Harper’s spokesperson, Andrew MacDougall, says that the speech in Parliament will celebrate “the close ties and values that bind us and look forward to how we can use those values to tackle the challenges that face us now in the world.”

One of those challenges is climate change. Outside Parliament on Thursday, there will be an anti-tar sands demonstration, which is supported by various organisations such as the UK Tar Sands Network, Greenpeace UK, the World Development Movement and 350.org

The UK Tar Sands Network is outraged that Harper has been shown such respect by the British. “It’s appalling that Parliament is bestowing this honour on a man who is clearly bent on promoting the destructive tar sands industry above all else,” argues Jess Worth from the UK Tar Sands Network.

She continues: “Opposition to Harper is widespread in Canada, particularly amongst the Indigenous peoples who are the sharp end of his dangerous quest to become an ‘energy superpower’. We will protest in solidarity with them on Thursday, to provide a counterweight to the sickening official pomp and circumstance which will undoubtedly greet this climate criminal.”

By inviting Harper to address the Parliament, the British government is explicitly condoning Harper’s policy on extracting the dirty tar sands.

There is a real disconnect going on here. The British government knows we have to act on climate change. Like any responsible government it knows that the science is telling us that we cannot burn the tar sands responsibly. At the same time it knows that Harper’s government has been trying for years to undermine key EU climate legislation, called the Fuel Quality Directive, and push the Keystone XL pipeline which will allow the dirty tar sands to be exported around the world.

The UK government knows that the science stacks up against the tar sands. Last month, on a visit to Europe, leading climate scientist, James Hansen, who argues it would be “game over” for the climate if tar sands were exploited, urged governments to leave the tar sands in the ground. “To leave our children with a manageable situation, we need to leave the unconventional fuel in the ground,” he said.

And the warnings just keep coming. Yesterday the respected International Energy Agency, warned that the world is no longer on track to limit the global temperature increase to 2 degrees Celsius, the internationally recognised limit that would keep warming to a manageable level.

The report argued that the current energy path – as typified by burning the tar sands – could result in a temperature increase of between 3.6 °C and 5.3 °. A five degrees warming would bring climate chaos, create tens of millions of climate refugees and the end of normal life as we know it for millions.

The IEA argued that fifty per cent of oil reserves need to stay in the ground, to keep warming below 2 °C. And that means the tar sands. The British government knows all this, but still receives Harper with open arms, as if nothing is wrong.

But even forgetting about climate change for a moment, the tar sands is having a devastating effect on Canada’s First Nations, right now. In the last few days, a spokesperson for the Athabasca Chipewyan First Nations has labelled the expansion of the tar sands “cultural genocide”.

Eriel Deranger of the Athabasca Chipewyan First Nation argues that they are on “the precipice,” as their health and culture is poisoned by the tar sands.

“It’s a genocide. It’s happening slowly, but we are dying off. We’re still drinking the water, and we’re eating the fish, but it’s getting poisoned,” she maintains.

And therefore you could argue the British Government is as guilty as the Canadians. Because they, like Harpers government, have purposefully stuck their head in the tar sands, no matter what the cost.

More on the demonstration outside Parliament can be found here.