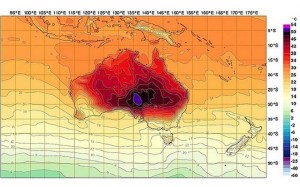 Timing is everything. Let’s start in Australia, where the current heatwave is so extreme that the Bureau of Meteorology’s weather forecasting chart has been forced to add the colour purple to depict temperatures above 50 degrees.

Dr David Jones, the head of the Bureau’s climate monitoring and prediction unit said. “The scale has just been increased today and I would anticipate it is because the forecast coming from the bureau’s model is showing temperatures in excess of 50 degrees”.

The heatwave is smashing records: Australia’s first six days of 2013 were all among the hottest 20 days on record in terms of average maximums.  The country set a new national average maximum of 40.33 degrees on Monday, beating the previous record – set on December 21, 1972 – by a “sizeable margin” of 0.16 degrees.

And worse maybe to come “The air mass over the inland is still heating up – it hasn’t peaked,” Dr Jones told The Age in Australia. “The heat over central Australia is not going to go anywhere.”

This is climate change in action. ‘‘The current heatwave – in terms of its duration, its intensity and its extent – is now unprecedented in our records,’’ Jones added.  ‘‘Clearly, the climate system is responding to the background warming trend. Everything that happens in the climate system now is taking place on a planet which is a degree hotter than it used to be.’’

So as Australia swelters in the intense heat and bush fires rage out of control, with many people fearing for their lives and livelihoods, the last thing the country needs is an eccentric and extreme climate denier telling them that climate change is not happening.

Giving new meaning to the lyrics in Noel Coward’s famous song, that only “Mad dogs and Englishmen go out in the midday sun”, later this month the British climate denier Lord Christopher Monckton begins a three month speaking tour.

During the tour no doubt Monckton will continue his now widely discredited dribble on climate denial. Even for his low standards, last month Monckton surpassed himself when he was permanently barred from the UN Climate talks for impersonating a Party and violating the UNFCCC’s Code of conduct.

Graham Readfearn has a great article in DesmogBlog about how Monckton will also give the key-note speech to Australia’s fringe political party Rise Up Australia, which “has what you might politely describe as some fairly interesting views on matters of science, the climate, abortion and religious tolerance.”

Meanwhile in the US, yesterday the National Oceanic and Atmospheric Administration confirmed that for the United States, 2012 was the warmest on record, saying that: “2012 marked the warmest year on record for the contiguous United States with the year consisting of a record warm spring, second warmest summer, fourth warmest winter and a warmer-than-average autumn.”

The average temperature for 2012 was 3.2°F above the 20th century average

Once again with impeccable timing, yesterday was the American Petroleum Institute’s State  of American Energy event. This is the oil and gas industry’s main showpiece event where they set out their annual plan of action for Congress.

Sadly though, the API’s President, Jack Gerard, continues to live in a parallel universe. If you read his speech the words “climate change” and “global warming” do not appear.

The API and its oil industry buddies continue to live in a world where climate change is not happening and where the oil and gas industry will save America’s economic woes.

Garard argued for the construction of the KXL and for the development of the tar sands, both seen as highly destructive projects for the climate:

“For the Keystone XL pipeline, that means thousands of new jobs immediately, while oil sands development could support hundreds of thousands of jobs in the next few decades.”

He also said: “There’s a new energy reality for the United States.  A reality of vast domestic resources of oil and natural gas.  The reality is that our energy supply is no longer limited, no longer foreign, and no longer finite…but is now American and abundant, greatly enhancing our national security.”

The trouble for Gerard is that he is ignoring the reality of climate change. You cannot have “unlimited” drilling, without severe repercussions for the climate.