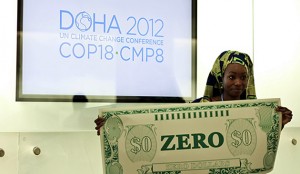 So once again at the eleventh hour the UN Climate talks pulled a flawed rabbit out of the hat. Some kind of deal was better than no deal.  Or was it?

As the editorial in the Irish Times said simply: “Not much was expected of the UN’s 18th conference on climate change in Doha, Qatar, and not much was delivered.”

In the end, after the negotiations were extended by 24 hours a new deal was struck called the “Doha Climate Gateway” which extended the Kyoto Protocol to 2020.

Let’s not get carried away. Is this deal a gateway to reducing emissions to the level demanded by scientists trying to keep warming to 2 degrees C? The answer is a resounding “No”.   Indeed there are several large flaws in the plan large enough to drive an oil tanker through.

You could argue that extending Kyoto keeps the UN process alive.  But it remains on life support. The countries that have signed up to the Kyoto Protocol only account for 15 per cent of the world’s total emissions. Crucially the world’s largest historical polluter, the US never signed up.

Back in 1997, Kyoto excluded developing nations like China, which since then has grown to become the world’s largest polluter. Now China says it will not sign a deal unless the developed nations pay the lion’s share of cleaning up their mess. The US won’t sign up to anything unless China does.  So this stalemate continues, amongst many others between rich and poorer nations.

The end result is always a last minute compromise thrashed out by sleep-deprived officials, which every year falls short of what the scientists say is needed.  It will do next to nothing to cut emissions. Moreover there was no binding agreement on a finance deal from the rich to the poor.

Once again the US blocked action on crucial issues such as “damage” and “loss” just weeks after President Obama argued that it was essential that we tackled climate change.

The country’s climate envoy, Todd Stern, was overheard saying: “I will block this. I will shut this down.”

As one news report put it: “The U.S. delegates blocked all references that implied compensation or liability, openly admitting they feared a political backlash at home, according to an anonymous source.”

“Obama’s team exhibit no improvement from previous COPs,” Kumi Naidoo, the head of Greenpeace said. “Obama’s legacy could turn out to be no better than his predecessor’s.” And don’t forget his predecessor was oil man George W Bush.

The talks will be remembered for the heart-felt plea by the Philippine climate change commissioner, Naderev Sano, who said “I appeal to all, please, no more delays, no more excuses. Please, let Doha be remembered as the place where we found the political will to turn things around. Please, let 2012 be remembered as the year the world found the courage to find the will to take responsibility for the future we want. I ask of all of us here, if not us, then who? If not now, then when? If not here, then where?”

He fought back tears as he spoke – his speech coming just days after the Philippines were hit by yet another tornado. So is there any ray of hope? Kelly Rigg, the Executive Director of GCCA, spoke at the Momentum for Change awards ceremony in Doha last week.

She argues that “To be clear, we are still barreling down the highway to a dangerously warming world. Nothing happened in Doha which could even remotely be thought of as hitting the brakes, and the US was roundly criticised for blocking key agreements despite President Obama’s election night hint of a new-found sense of urgency.”

She sees hope, not in the UN process, but elsewhere. “My final optimistic thought is for all of the progress being made on the ground in so many countries at the national, state and local level. Let’s hope that it generates enough political will to get the job done properly next year”.