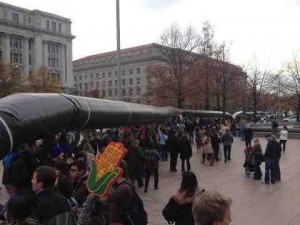 Over 3,000 people marched around the White House yesterday with a simple message for President Obama: Say no once and for all to the KXL.

The marchers carried a 500 foot “oil pipeline” and held banners with famous quotes from President Barack Obama about his commitment to tackling the climate crisis, including his recent one from his re-election night: “We want our children to live in an America that isn’t threatened by the destructive power of a warming planet.”

Among those who made the journey were ranchers and farmers who live along the proposed route. “I never wanted this tar sands pipeline, but TransCanada bullied me out of my land and now they’re ripping my farm apart,” said Susan Scott, a landowner who lives in the path of the pipeline. “This pipeline puts my family, my loved ones, and my property at risk; but we all need to rise up and defend our homes because this isn’t just about Texas. Keystone XL threatens us all.”

And it is this message that was reiterated by many: you cannot tackle climate change and allow the KXL. So just days after President Obama made several promising statements in a news conference last week about his willingness to tackle the climate crisis, the protestors wanted Obama to start by putting words into action.

The event in Washington was organised by 350.org. Its Executive Director, May Boeve said: “The climate silence is broken, and now the President can show us he’s serious with a decision already on his desk: rejecting the Keystone XL pipeline.”

The event followed Bill McKibben’s “Do the Math” tour event in Washington, part of a 21-city nationwide tour that is connecting the dots between extreme weather, climate change, and the fossil fuel industry.

Let’s not forget the other reasons why we need to disinvest out of crude oil as soon as possible. Just days before the Washington rally, BP agreed to pay $4.5 billion in fines and other penalties and to plead guilty to 14 criminal charges related to the fatal explosion two years ago that killed 11 people in the Gulf and spilt millions of barrels of crude.

However, no sooner was the ink dry on BP’s deal with the American authorities than we have another disaster in the Gulf of Mexico. One person remains missing, with one confirmed dead after an explosion on the rig owned by Houston-based Black Elk Energy on Friday.The two workers jumped from the burning platform after it exploded. The rig was not producing oil, so the risk of a major environmental disaster has been largely diverted.

Ed Markey, the House of Representative who was highly critical of BP after Deepwater Horizon disaster said: “Today’s incident shows that increasing safety of offshore drilling and for hard-working men and women is still not a settled matter.”

Other voices said it was another reminder to move away from fossil fuels. Frances Beinecke, who served on a presidential-appointee on a commission that examined the oil industry after the BP spill, said: “We need stronger safeguards and increased oversight to reduce the risk of accidents. We need to prioritize safer forms of energy that don’t threaten the lives of our workers and foul our waters. Until then, we’ll remain stuck on this collision course with disaster.”

So Obama, you have four more years, you could move away from “the collision course with disaster”, you can say no to the KXL.  You can say no to Shell in the Arctic. And two years after Deepwater you can bring in radical health and safety regulations that protect offshore workers.

But at the same time, Mr. President you also have to do the math and realise we cannot carry on drilling if you want to avert a climate crisis. And if you really do “want our children to live in an America that isn’t threatened by the destructive power of a warming planet”, then the time to act is now.