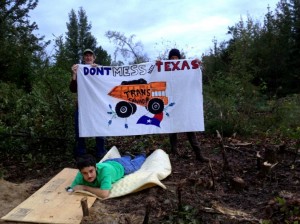 From Canada to Texas, from protestors to oil industry whistleblowers, there is one message. Stop the tar sands and KXL.

Yesterday thirteen people stood in a court in Ontario in Canada protesting against the country’s reckless exploitation of the tar sands.

One of those protestors was Graham Saul, who used to work for Oil Change International: “We have had the opportunity to sit down in front of a judge to explain why climate change is an urgent issue; explain why this government is misleading Canadians and leading us in the exact opposite direction we need to go,” he said yesterday.

Also giving evidence for the defendants was the climate researcher from the IPCC Dr. John Stone, who will be testifying today if the case goes to full trial.

They are not alone in being arrested against the tar sands and its pipeline. Hundreds of miles away, another protestor, Alejandro Delatorre (pictured), spent last night in jail in Texas after attempting to stop construction on the KXL.

Delatorre now faces four charges after locking his arm to an easement on a farm near Winnsboro. Speaking before his arrest he said: “Exploiting tar sands is a ridiculous project and shows how desperate corporations are to scrape the bottom of the fossil fuels barrel and completely ignore the reality of the toll they are taking on people’s lives for a short-term profit.  This pipeline means disaster for people here in Texas and all over the world.”

The local owner Gabriel Cordova is also opposed to the pipeline: “These kids are protesting not for my property, not for anybody, any property owner. They’re protesting to strictly save the earth. I mean, this pipeline is going to be pushing some very toxic products through.”

Meanwhile, nearby protestors from the Tar Sands Blockage continue their tree protest, which has entered its second week. Yesterday TransCanada’s machinery came dangerously close to the tree sitters.

Meanwhile Canadian writer, Andrew Nikiforuk, has two great articles about pipeline safety. He writes about a pipeline materials engineer, Evan Vokes, who worked for TransCanada Pipeline for five years, who has become a whistleblower about the how dangerous Canada’s pipelines are.

Vokes has filed complaints with various Canadian bodies about repeated violations of standard safety regulations and codes with Canadian pipelines.  His concerns reflect the concerns of other whistleblowers from other pipelines such as the TAPS – the Trans Alaska Pipeline and BTC – the Baku -Tblisi – Ceyhan pipeline.

His concerns do not bode well for the safe operation of the KXL.  Indeed TransCanada was Vokes’ former employer. The first phase of KXL leaked 14 times in just two years and the company has now been ordered by the National Energy Board to investigate Keystone’s pumping stations in Canada.

Vokes says there is a “culture of deviance” and a lack of accountability. “Someone is going to die” he says. “My motivation is to prevent unnecessary death and environmental damage.”