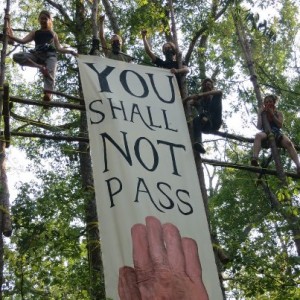 Yesterday morning eight young activists put their lives on the line in the fight against climate change.

They climbed 80 feet into trees in the path of the controversial Keystone XL pipeline in North East Texas.

The activists then built platforms in the trees and unfurled a huge banner saying “You Shall Not Pass” as they waited for the pipeline contractors to turn up.

They could be up on these for a long time. They have pledged not to come down until the pipeline is stopped for good.

It promises to be a tense and potentially highly dangerous stand-off . The construction of the pipeline cannot proceed until the eight tree-sitters descend.

Yesterday the heavy machinery came closer and closer, but stopped short of the protestors’ “tree village”.

The organisers of the protest – from the Tar Sands Blockade – say the tree sitting is carefully organized to ensure that everyone is safe as long as TransCanada does not attempt to continue clear-cutting the trees.

But that is highly unlikely. Whilst President Obama is still to make a final decision of the northern leg of the KXL, the Southern leg is being built, albeit under a different name: the Gulf Coast Project. In reality though it is KXL south.

Mary Washington, one of the Tar Sands Blockade members sitting in a tree, says why she is taking action. “Today I climbed a tree in the path of Keystone XL to demand TransCanada stop construction of this dirty and dangerous pipeline.”

She adds: “This pipeline is a disaster for everyone it touches, from the cancer tar sands extraction is causing indigenous communities, to the water poisoned by inevitable tar sands spills, to the landowners whose land has been seized, and to everyone that will be affected by climate change.”

Ron Seifert, a spokesperson with Tar Sands Blockade also commented that: “Today’s bold action by these eight brave people demonstrates their resolve to stop this dirty and dangerous pipeline. They understand the severity of the threat and that taking action is less risky than doing nothing. We are defending our homes, our communities clean drinking water, our land rights, and a stable, livable climate.”

The blockade is a continuation of an unprecedented summer of actions against fossil fuel infrastructure across America, from Montana to Ohio to New York.

One of those who has led these protests is Bill McKibbon from 350.org  “Climate change killed half a billion trees in Texas last year–and if TransCanada cuts these down, then the dirty oil they send down the pipeline will trigger yet more out-of-control warming”, he says.