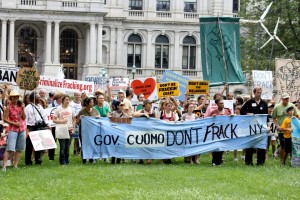 The people have spoken, but they are being ignored.

Yesterday, over one thousand people marched to New York’s state Capitol to demonstrate their opposition to fracking. They delivered a pledge of resistance which has now been signed by thousands of people.

The march was intended to intensify pressure on New York Governor Andrew Cuomo as he prepares to decide whether or not to allow fracking in the state, a decision which is expected sometime in September.

The protesters carried banners such as “Don’t Frack New York”  and “No Drill, No Spill”  and “Don’t be fracking crazy”.

They performed street theatre that depicted Cuomo as a fat cat stuffing his pockets full of cash from the fracking companies.

The crowd were addressed by Josh Fox, director of the anti-fracking documentary “Gasland”.  “If they allow this to happen, I’m putting myself between the rig and the pad,” said Fox. He received a rapturous response from the crowd.

Bill McKibben, from 350.org also addressed the crowd. Interviewed before he spoke, he said: Will he [Cuomo] stand up to the fossil-fuel industry? This will be the way in which environmentalists judge him going forward.”

One person who has stood up against Big Coal but is in love with gas is New York City Mayor Michael Bloomberg. Last Friday Bloomberg co-wrote an op-ed in the Washington Post opinion piece in favour of fracking.

Bloomberg wrote: “The production of shale gas through fracking is the most significant development in the U.S. energy sector in generations, and it affords four major benefits that people on both sides of the debate should welcome.”

He argued that fracking reduced energy costs, spurs economic growth, reduces dependence on coal and even allowed more renewables into the electricity supply. Bloomberg concluded: “We can frack safely if we frack sensibly. That may not make for a great bumper sticker. It does make for good environmental and economic policy.”

Putting his money where his mouth is, he also gave a $6 million grant from his philanthropic organization to the Environmental Defense Fund for work to minimize adverse environmental impacts from fracking.

“The environmentalists who oppose all fracking are wrong, and the drillers who claim that regulation will kill the industry are wrong,” Bloomberg added. “What we need to do is make sure that the gas is extracted carefully and in the right places, and that has to be done through strong, responsible regulation.”

Yesterday, Bloomberg released a new study that argued that additional natural gas supply, as well as distribution infrastructure, are needed to meet rising demand in the city.

The study confirmed the “importance” of gas “to New York City’s reliable, clean energy future and demonstrates that with responsible, well-regulated development, we can make the investments that both improve our air quality and save lives,” Bloomberg said in a statement.

The new study predicts that by 2030: “over 80 per cent of the gas going to New York City will be shale gas from nearby areas.”

Eighty percent is a huge figure. Will the people of New York allow the city to become dependent on fracking?

Only time will tell.