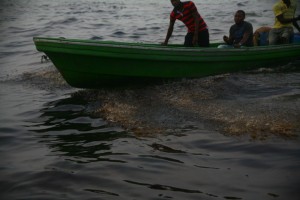 Finally after fifty years of the Nigerian government playing softly, softly with Shell, is the country about to start playing hard-ball with the oil giant?

The country’s oil regulator has asked Shell to pay a whopping $5 billion fine for a spill off the country’s southern coast last December.

Late last year there was a leak of 40,000 barrels of oil at Shell’s Bonga field during a transfer of oil to a tanker. The Bonga field is crucial to both Shell and Nigeria and accounts for around 10 per cent of oil from the country.

Peter Idabor, the head of Nigeria’s National Oil Spill Detection and Response Agency has upped the ante against the oil giant by urging MPs on the House of Representative’s Environment Committee to approve his proposal.

Idabor said that the spilled barrels affected approximately 950 square kilometers of water and had a “direct social impact on the livelihood of people in the riverine areas whose primary occupation is fishing”.

Idabor told the BBC that “The people could not fish after a long period after the spill. So that’s why we are looking at the damages … But we want to make it very clear that it’s wrong for them to say they cannot pay. Are they denying that they spilled 40,000 barrels of crude oil into the waters?”

Shell predictably said that there was no “basis in law for such a fine”, saying it had “responded to this incident with professionalism and acted with the consent of the necessary authorities at all times to prevent environmental impact.”

The fine would be by far the largest Shell has ever received in Nigeria. It would amount to about $125,000 for each barrel of oil split in the Bonga field.

It would also be much larger than the amount BP is facing  – $4,300 per barrel – following the Deepwater Horizon spill.

But the history of Nigeria shows that the chances of Shell ever paying the fine are remote.