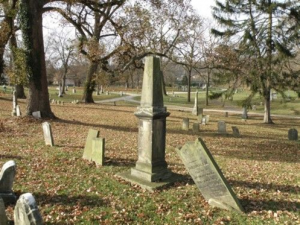 In the rush to frack America nothing, it seems, is sacred.

Not content with fracking in forests, farmland, backyards, playgrounds and parks, energy companies are looking to frack in cemeteries.

Fracking has already raised huge questions about its ecological impact and environmental sustainability – but now it is throwing up other deeply moral issues too.

The industry is looking to drill in cemeteries in Ohio, Colorado and Mississippi.  Buried deep beneath the dead are lucrative deposits of shale gas that could be exploited via fracking.

People opposed to the drilling, of course, say that some places are sacred and should not be drilled.

The Associated Press has run a piece looking at the issue of fracking in cemeteries.

“Most people don’t like it,” seventy year old Marilee Pilkington, who lives near a cemetery in rural Poland Township in Ohio, which was threatened by fracking, told the AP.  Her father, brother, nephew and niece are all buried in the cemetery.

She adds: “I think it’s a dumb idea because I wouldn’t want anyone up there disturbing the dead, number one, and, number two, I don’t like the aspect of drilling”.

And the industry is trying to buy people with lucrative offers of cash. Earlier this year, the trustees of the cemetery were offered to lease mineral rights for $140,000, plus 16 per cent of any royalties, for any oil and gas for the land.

Although the offer was eventually turned down, two other local cemeteries also received offers.

One of the trustees, Mark Naples told the Associated Press that “Our concern was we weren’t going to let anybody come in there and move anything. They weren’t going to have my vote for that.”

In Pittsburgh the ensuing outcry about disturbing the dead allowed the city council to push for a citywide ban on drilling.

One councilman at the time, David Shields said: “Everybody (in the press) liked the ghoulish aspects of drilling on sacred ground and disturbing great-Grandma’s body and all that. I’d say there were many other issues of greater immediate concern.”

The list of other greater reasons gets longer and longer: Like water pollution, climate change and prolonging our dependence on fossil fuels and delaying the clean energy revolution.