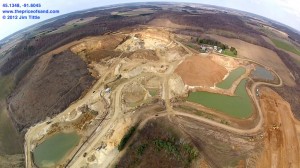 It is not so long ago that “fracking” moved from a term used by the oil industry to enter the mainstream collective consciousness, as the technique spread like a cancer across America.

Fracking is the process by which oil companies pump a mixture of sand, water and chemicals under high pressure to release gas. It has revolutionised the industry in the last few years.

On this blog I have written about the downsides of fracking – from the high gas leakage rates, to polluted water use, to the continuation of the hydrocarbon age.

But there is another downside that is now becoming apparent. For as fracking has boomed, so has the demand for high-silica fracking sand, known as frac-sand.

The demand for frac-sand has grown by an incredible 35 per cent in five years.

“It’s huge,” said a U.S. Geological Survey mineral commodity specialist back in 2009. “I’ve never seen anything like it, the growth. It makes my head spin.”

Such is the growth that the value of silica sand production exceeded $1 billion for the first time in 2010, according to statistics from the U.S. Geological Survey.

One leading US supplier expects frac-sand consumption to increase 30% in 2012.

But there is, of course, a downside to this boom.

Last month a spill at a sand mining facility in Wisconsin dumped an unknown amount of sand and other sediment into the St. Croix River and wetlands near the Minnesota border.

The sand-laden water might have harmed aquatic life. It was only investigated when a hiker reported seeing cream-coloured water in a creek flowing into the St. Croix River.

It was later traced to a 72-acre sand mining facility operated by Maple Grove-based Tiller Corp., where they located a leak in one of the facility’s holding ponds.

Apparently the mine’s employees had failed to notice the leak.

This is a fore taste of what is to come. The demand for sand has grown so rapidly that oil and gas companies are even buying up their own sand plants.

“The need for high quality sand has never been greater than it is today,” argues Jerry McGee, Chief Executive Officer of Cadre Proppants, a private-equity owned company that operates one of the largest silica sand mines in Texas.

But this “need” has a cost. In a great, stunning and powerful article on Tom Dispatch, and reported on Salon.com, Ellen Cantarow travelled through Wisconsin examining the downside of frac-sanding, and documented the human and ecological toll left in the wake of the boom.

It is well worth a read as she describes rural America’s fight against the oil and gas giants.

“This peaceful rural landscape is swiftly becoming part of a vast assembly line in the corporate race for the last fossil fuels on the planet. The target: the sand in the land of the cranes,” she wrote.

By July 2011, between 22 and 36 frac-sand facilities in Wisconsin were either operating or approved.

Seven months later, this had mushroomed to over 60 mines and 45 processing (refinement) plants in operation.

The only way to get a grasp on this expansion is from the air, where aerial videos and photographs “reveal vast, bleak sandy wastelands punctuated with waste ponds and industrial installations where Wisconsin hills once stood .. While bucolic landscapes disappear, aquifers are fouled, and countless farms across rural Wisconsin morph into industrial wastelands.”

And in that sense, Wisconsin is beginning to look like the dreaded Mordor landscape of Alberta:  whether its tar sands or fracking our countryside is dying due to our addiction to oil.