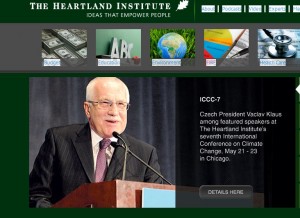 Next week the cream of the world’s climate deniers will descend on Chicago for the Heartland Institute’s latest annual sceptic-fest.

The headline for the conference is “Real Science, Real Choices.”  That’s more fact-twisting propaganda from Heartland that has pushed climate denial for years.

The Institute was hoping for a bumper conference that would help it push its climate denial agenda, its credibility and funding.

But that looks like it is not going to happen. The conference will take place as Heartland is under pressure like never before.

The Institute is facing increasing financial and political isolation. Ever since the Institute ran its “Unabomber advert” earlier this month, its sponsors and donors have finally woken up to the realities of its dangerous climate denial extremism.

They are now dumping Heartland faster than rats on a fast sinking ship.  So far eleven companies have said they will no longer fund Heartland, including Eli Lilly, BB&T, Pepsi, GM, State Farm, Diageo, the Association of Bermuda Insurers and Reinsurers, Renaissance Re, XL Group, Allied World Assurance, and USAA..

“More than 100,000 Americans are telling corporations to stop polluting our democracy by supporting organizations like the Heartland Institute,” said Daniel Souweine, Campaign Director of Forecast the Facts. “Heartland’s remaining funders would be wise to heed their calls. Heartland’s radical agenda stains the reputation of any business that wants to be considered a responsible corporate citizen.”

However, surprisingly, some companies are standing by Heartland, risking serious reputational damage by doing so. Pharmaceutical giant Pfizer argues that it gets “significant benefits from our involvement” with the group.  Pfizer said its support for the climate deniers helps “advance our business objectives”.

Pfizer is adopting a completely nonsensical position here, arguing that, whilst it does not agree with Heartland’s position on climate change, it stands by its work on health care.

What it fails to understand is that climate change is a fundamental global health threat, and it is a key facet of health care policy. The Heartland Institute’s radical attacks on climate science include denial of the impacts on climate pollution on health care policy, including outrageous statements such as there is “overwhelming evidence for a positive effect of global warming on human health.”

In a damage limitation exercise, and to prevent further haemorrhaging in its funding, last Friday Heartland’s Finance, Insurance, and Real Estate project was spun off to become its own think tank, called the R Street Institute.

According to Ray J. Lehmann, the project’s director of public affairs, “one thing that will certainly change from ending our association with Heartland: R Street will not promote climate change skepticism.”

In another blow to Heartland, a meteorologist from the National Hurricane Center has asked to be disassociated from the organisation. Chris Landsea, the hurricane centre’s science and operations officer, reported that:

“The billboard campaign that you all have recently been displaying is not in good taste nor is it furthering the advancement of better understanding of how our climate fluctuates and changes. Please remove my name from your list of experts.”

The billboard advert was never intended to advance the better understanding of climate science.

But nor is next week’s conference. It is designed to carrying on trying to keep the controversy open about climate change, when the science is essentially closed.

In fact the advert and conference are just different parts of Heartland’s disinformation campaign. The sooner we realise that the better.