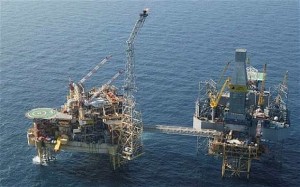 Oil companies operating in the North Sea could face an estimated $13 billion (Euros 10 billion) bill in light of the Elgin gas spill which could also seriously affect their credit ratings, according to rating agency Fitch.

Total’s Elgin platform in the North Sea has been leaking gas since last month with some estimates that it may take up to six months to fix.

It has been estimated that the Elgin well is leaking about 200,000 cubic meters of natural gas per day, which is enough to supply more than 100 average homes with natural gas for an entire year.

Fitch argues that the on-going accident makes it more likely that the European Commission will implement far stricter licensing and safety requirements on oil and gas companies operating in the North Sea.

The agency believes that some of the proposals currently being considered would dramatically increase the environmental liabilities of the companies operating in the North Sea, forcing them to offset EUR10 billion in order to obtain operating licenses.

This would of course have a serious knock on effect, putting the companies’ credit ratings at risk.

It was back in October 2011 that the European Commission proposed requirements for licensing authorities in the EU member states to ensure that only operators with “proven sufficient financial capacities” necessary for environmental protection would be allowed to explore for, and produce oil and gas in EU waters.

The Elgin leak is only going to add to calls for tightened regulations and strengthened safety requirements for offshore drilling, according to Fitch.

Nothing is certain yet. The draft legislation is still some months away and requires approval from the European parliament and EU member states and is being opposed by the UK, which is not surprising.

However Fitch argues that it considers the chances of formal adoption of some or all of the proposed EU-level standards is “growing” despite the UK opposition.

The oil industry has attacked the Commission’s plans, arguing they would weaken what is already a “robust, world-class offshore safety regime”.

But if it is so robust, why do accidents keep on happening? The latest figures from the British government reveal that there have been 69 reports of oil and chemical spills in the North Sea in the last three months alone.