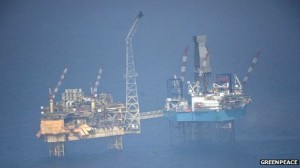 First the good news. Over the weekend the French oil giant Total confirmed that the flare that had been burning on its abandoned Elgin rig in the North Sea had “extinguished itself.”

The flare was causing real concern in case it ignited the escaping gas. With the flare out, Total has said it could begin drilling two relief wells within 10 days.

Now the bad news for Total. It looks like the accident could have been prevented.  The company has concede that that they first knew there were problems with the leaking well on 25 February, a full month before the gas burst through the well casing.

“On February 25 we started observing irregular pressure on the plug on the G4 well on the Elgin field,” Total’s UK Managing Director Philippe Guys has conceded. He said the company reacted by trying to regulate the pressure in the well, which had been plugged in February 2011.

But crucially, the company then went into denial mode about the risk of an accident, repeatedly telling workers on the rig that a leak was “impossible”.

Hours after their last briefing that everything was fine, the company then had to evacuate the whole platform due to safety concerns over the leaking gas.

“The workforce were repeatedly told that a failure in Annulus C (the pipe casing) could not happen and even if it did, a design feature would prevent a gas leak,” Jake Molloy, head of the RMT union’s offshore oil and gas workers section, has told Reuters.

The leak has spewed an estimated 200,000 cubic meters of natural gas a day into the atmosphere.

Even if drilling of the relief well starts within days it could be six months before it is stopped if it takes a relief well to stop the flow.

Alternatively Total may try a “top kill”, similar to that tried by BP in the Gulf of Mexico on the Macondo well, by pouring heavy drilling mud from above.

Either way, this disaster is not going to be over any time soon.

Meanwhile, the British authorities are saying that the light condensate sheen on the water is evaporating quickly and poses no serious ecological threat.

But a research vessel owned by Greenpeace has set sail from Germany towards over the weekend so at least we will now get an independent assessment of the situation.

One thing is for sure. Oil spills are costly business. Total’s shares have fallen around 7 per cent since the incident, wiping $10.62 billion off its market value.