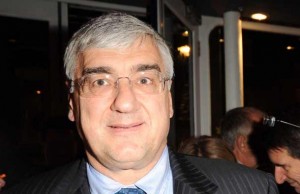 In the UK, David Cameron’s Conservative Government is still reeling from the “Cash for access” sting by the Sunday Times newspaper at the weekend where the Conservative co-party Treasurer, Peter Cruddas was caught promising access to the prime minister, including private dinners, in return for donations of over £250,000.

In order to try and damage the fallout from the revelations, Cameron has published a list of the rich Conservative donors who attended private dinners at his flat in Downing Street.

One of those on the list is Michael Hintze, (pictured)  the 58-year-old Australian billionaire, who is – according to Forbes the 913th richest billionaire in the world, who runs the CQS hedge fund.  Hintze has not only only funded the Conservatives, but many individual members of the Cabinet, including the Chancellor George Osborne.

Yesterday Hintze was also outed by the Guardian newspaper as not only being a financial backer of the Conservatives but also of the climate sceptic thinktank founded by, Lord Nigel Lawson, the Global Warming Policy Foundation (GWPF).

Hintze’s backing for the GWPF was made apparent in an email sent last year where he let slip that he was “supporting Nigel Lawson’s initiative.”

So why is this important?  Firstly because of the climate sceptic nonsense the GWPF spouts. Leading Nasa climate scientist James Hansen  has called it “one link in a devious manipulation of public opinion [regarding climate change].”

Secondly, since its launch the Foundation has reeked of double standards and hypocrisy. At the same time as calling for climate scientists to be much more transparent, it has refused to disclose who funds it.

So now we have a known financial backer of climate denial and the Tories. As the Guardian wrote yesterday “the revelation that Hintze, who has also donated £1.5m to the Tory party, is connected with climate change scepticism will be an embarassment for David Cameron, who has pledged to lead the “greenest government ever”.

In light of the “Cash for access” scandal Cameron has promised greater transparency. But if the Conservative government is serious about transparency then it must force think tanks to disclose their large financial backers, just as any political party has to.

Because think tanks are another “cash for access” route. At the moment anyone can donate to a think tanks and they can influence public debate and even government policy.

The GWPF boasts in its accounts that: “We have been able to establish ourselves as the leading thinktank in our field… Before we came into existence there was virtually no debate about global warming policy in the UK. There is now increasingly lively debate and, within the media, only the BBC continues to regard the matter as being definitively settled and not a proper subject for debate. The GWPF has played an important part in achieving this change.”

Make sense to you?  Me, neither.  This is crude cash for public policy manipulation.

If David Cameron is serious about trying to be green and about political transparency he should do two things. Firstly, he should make sure that the Conservatives never take another penny off Hintze and then he should bring in legislation that all think tanks in the UK – from whatever political persuasion – need to disclose donors who give £1,000 or over.

If donors don’t want their names public, then they don’t cough up their cash.  It’s that simple. And its not just a debate to be had in Britain.

All you have to do is look at the mystery donor of the Heartland Institute, who has donated $13 million to Heartland’s climate denial work over five years, to know that this is a debate that needs to happen in the US too.