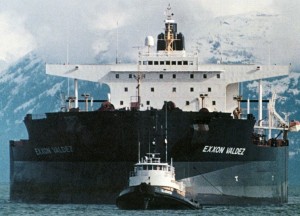 For some Saturday’s Anniversary would have been a painful reminder of the reckless behaviour of Big Oil.

It was on the 24 March 1989, that the Exxon Valdez ploughed into rocks in Prince William Sound in Alaska spilling at least 11 million gallons of oil.

Although, the Exxon Valdez’s Anniversary no longer makes the news elsewhere, in Alaska many will still remember that fateful night and the dreadful days and years that followed.

The Exxon Valdez caused one of America’s worst ecological disasters, certainly when it comes to impact on wildlife, clean-up crews and the indigenous communities that are dependent on the rich waters of Alaska for their survival.

The tragic sense of loss was conveyed by one Alaskan Native elder, who said simply:  “what we see now is death. Death, not of each other but of the source of life — the water … Never in the millennium of our tradition have we thought it possible for the water to die. But it is true.”

BP’s Deepwater Horizon spill may have spilled far more oil, but the body count in terms of dead wildlife and dead and dying clean up workers from the Exxon Valdez remains far greater.

And there would have been a few wry smiles and utterances of good riddance, with the news that, some twenty three years on and the Exxon Valdez too is finally going to meet her end.  The 1,000 foot-long supertanker has just been sold for scrap for $16 million and is about to be dismantled in India.

In 2008, Exxon sold the tanker and it was converted to an ore carrier named Dong Fang Ocean.

In November of 2010 the Dong Fang collided with the Aali, a Malta-flagged cargo ship, in the South China Sea.

Another collision meant another rename. And this time she was recalled the Oriental Nicety.

Finally she has been sold for scrap in India.

As Alaska’s better noire is recycled, Exxon Valdez veteran Rick Steiner, who has battled the industry long and hard over the impact of the spill has penned a great piece in the HuffPost about the dangers of drilling now.

He writes that as the industry prepares to start exploratory drilling, “the public is hearing some familiar promises from industry and government — the risk of a catastrophic oil spill is small, best available technology will be used to prevent spills, any oil spill will be effectively contained and cleaned up, the government will keep a vigilant eye on industry and so on. We heard the same empty promises 40 years ago.”

A tale that should not be forgotten, even as the Exxon Valdez meets her final end.