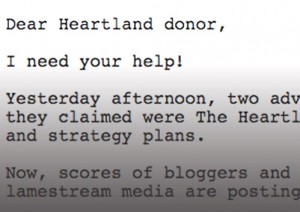 I have known the leading climate sceptic-watcher, Cindy Baxter, for many years. Once labelled by the Guardian newspaper as the “Antipodean scourge of the oil industry”, Baxter has long been a thorn in the side of those who deny climate change and carry drilling oil regardless of any consequences.

And, like many who have watched the way the climate deniers at the Heartland Institute have responded to their documents being leaked on Valentine’s Day, she has grown angry at the hypocrisy and double standards.

She was especially angry at the way that Heartland had reacted with outrage that Dr Peter Gleick had used a different identity to gain access to the documents. Heartland said “Gleick’s crime was a serious one.”

And Baxter had more reason to be angry than most. As she wrote in a letter last week to Joseph Bast, the head of Heartland:  “I’ve read with interest the angry statements by Heartland officials against Dr. Peter Gleick’s impersonation of a board member to obtain information from the Heartland Institute.”

In the letter Baxter recalls that in December of 2007, she was in Bali for the United Nations climate treaty negotiations managing the media operations for Greenpeace International. One morning she received a call a call shortly after 4 AM from someone calling himself “John” and saying he was with a US environmental NGO.

“John” then asked for the media list for the conference and if he could get it from Baxter, who declined to give it to him because the list was not publicly available.

Unbeknown to Baxter, “John” recorded the call and two days later a partial audio recording of that conversation was made public by the Heartland Institute in a press release. In it, Heartland Senior Fellow for Environment Policy James Taylor attacked the United Nations for sharing its media list with NGOs.  The recording has since been taken down from the Heartland website.

In the letter Baxter wrote: “To recap, the Heartland Institute used a false organizational identity in order to obtain an internal document. It also surreptitiously recorded a telephone conversation (illegally, I believe, if it was done from your home state of Illinois) then posted it online to attack me in the same sort of privacy invasion you’ve been complaining about. Does any of this sound familiar?”

Baxter is now asking Heartland to re-post the audiotape of the full conversation on its website so “we can figure out if you or your organization violated applicable state, U.S. or even Indonesian law.”

Moreover Heartland has  repeatedly tried to dismiss the scandal in the media as “fakegate” because the documents were not genuine. However, it has now had to admit that seven out of the eight documents that were released by DeSmogBlog and Gleick were totally genuine, although it continues to dispute the authenticity of the climate strategy memo.

So let’s see how Heartland respond to Baxter’s letter. A week after she sent it, the silence is deafening…

To read Cindy’s blog on this, go here.