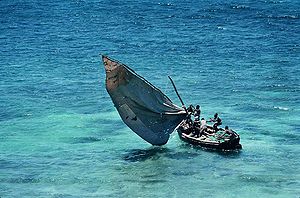 Some twenty five years ago when Amoco were exploring for oil offshore Somalia, the company was convinced that the waters of East Africa contained vast reserves of oil and gas.

But its exploration was unsuccessful, Somalia was ripped apart by civil war and the waters of East Africa, once the tranquil domain of dhows and fisherman, became the lethal hunting grounds of Somali pirates.

Since then the occasional oil company has come and gone, but it was only last month that Statoil “set the oil industry abuzz”, argues today’s Financial Times, “when it announced it had found large volumes of natural gas off the coast of Tanzania, confirming east Africa’s reputation as one of the energy world’s most promising new frontiers.”

Tim Dodson, Statoil’s head of exploration calls the find a “fantastic” one which is “our biggest ever discovery as operator outside Norway”.

It has been a long time coming, but finally East Africa looks set to have an oil and gas boom. As the oil majors pile in, the pace of drilling is picking up, with an expected 23 wells to be drilled this year, almost double the number in 2011.

“Eastern sub-Saharan Africa has a lot of potential to grow quickly”, says a spokesperson from Eni. “It’s a very exciting moment, both for us and the countries we’re in.”

Exciting may not be the word that some observers use though.  The dark consequences of the oil curse could follow.  All the area has to do is look at the trouble oil has brought to West Africa and there would be legitimate cause for concern.

One country that is buzzing is Mozambique where there have been recent huge finds of gas offshore.

“With gas exploration you have to find an elephant field to make it worthwhile,” says Simon Ashby-Rudd, an oil investment banker at Standard Bank tells the FT, “They didn’t just find one elephant – they found a herd.”

Recent finds of gas off Mozambique could yield as much up to 60tn cubic feet of recoverable resources of gas, which is nearly as much as Kuwait’s entire reserves, and there could be more to come.

But the disparity of the oil money pouring in is startling. Anadarko is building a $25 billion LNG plant in the country, which is double the country’s whole GDP.

Another article in today’s FT examines the consequences of this oil/ gas and mining boom that is sweeping the country.

“The question on the minds of Mozambicans and donors”, asks the paper, “is whether the country can harness the benefits to lift the nation out of poverty and in doing so avoid the resource curse that has blighted so many before it.”

One donor official tells the FT: “It’s a race against time – is the big money that corrupts going to come before stronger checks and balances?”

And the lessons from history do not look good.