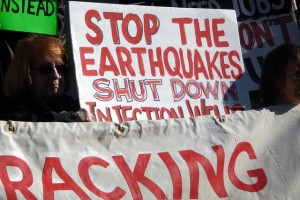 In a decision that will both dismay and worry environmental campaigners and communities facing fracking across Europe, the European commission has concluded that existing laws are adequate to cover the controversial drilling technique.

A new report undertaken for the Commission by the Belgian law firm Philippe & Partners, argues that there is no need for more environmental legislation concerning fracking until it reaches commercial scale.

“Neither on the European level nor on the national level have we noticed significant gaps in the current legislative framework, when it comes to regulating the current level of shale gas activities,” the study says.

However in words that are meant to reassure people the report added that: “However, this is no reason for complacency, since this assessment explicitly refers to the current level of experience and scale of operations as can be expected during the exploration phase. “

Although the study was finished last November, it has only just been released by the Commission. It also just covered four countries: Sweden, Poland, France and Germany.

But the report argues that activities relating to exploration of shale gas are already subject to EU and national laws and regulations, such as the Water Framework Directive, the Groundwater Directive and the Mining Waste Directive. The use of chemicals is covered by the REACH regulation.

“It is a new technology and we do not have a specific legislation on shale gas, because it is so new,” said Marlene Holzner, European commission spokesperson on energy. “So the study only says that the existing regulations are applicable for shale gas, that the tool is there and has only to be applied.”

Ironically this report is at odds with another report submitted last summer to the Commission, which was written for the European Parliament’s Committee on Environment, Public Health and Food Safety.

That report called for “consideration to be given to developing a new directive at European level regulating all issues in this area comprehensively”. The report, entitled Impacts of shale gas and shale oil extraction on the environment and human health also recommended that for fracking, “all chemicals to be used should be disclosed publicly, the number of allowed chemicals should be restricted and its use should be monitored.”

But of course by the time fracking gets to a commercial scale it could well be too late to monitor all the chemicals being used and to rush in EU-wide legislation, especially given the time it takes to draft legislation and then get it past the EU’s various respective bodies.

Meanwhile, there would be huge financial and other pressure from the oil industry to carry on drilling without having to wait for further regulations. It is a scenario that many communities in America are finding to their cost.

The new report will be used by the oil industry as a green light to carry on fracking. Poland, where the fracking revolution is occurring full steam ahead, is planning to begin commercial shale gas production in two years’ time. So if laws are to be implemented at the EU level to cover commercial drilling, that needs to happen now.

Not every country in the EU though is fracking mad, though.

A couple of weeks ago, thousands of Bulgarians protested against fracking over fears it could poison underground water, trigger earthquakes and pose serious public health hazards. Protestors rallied in more than six Bulgarian cities calling for a fracking moratorium.

“I am opposed because we do not know what chemicals they will put in the ground. Once they poison the water, what shall we drink?” said Olga Petrova, 24, a student who attended a protest in Sofia.

Whose going to draft a law to stop that happening again?