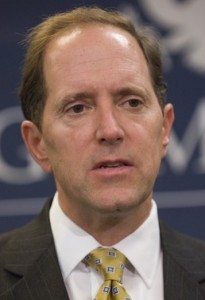 The fossil fuel industry is nothing if not clever. Rather than try to defend on the merits of their taking billions of dollars a year in government handouts, they’ve decided to change not only the conversation, but the language itself.

So for example an attempt to repeal some of the oil industry’s subsidies becomes the imposition of “job-destroying energy taxes”.

In this Orwellian effort the industry certainly has a friend on the Supercommittee in the form of Rep. Dave Camp, Chairman of the powerful House Committee on Ways and Means. The Michigan Republican has repeated the industry’s absurd suggestion that cutting government handouts to Big Oil “would only increase our dependence on imported oil”. He has also railed against the Obama Administration’s attempts to eliminate decades-old tax breaks and subsidies for the oil industry, calling them “punitive new taxes”.

But of course he would say those things. According to Payback Time, a recently released report from Oil Change International and Public Campaign that looks at ties between the fossil fuel industry and Supercommittee members, Rep. Camp has accepted at least $512,744 in dirty energy money since 1999. Some of Camp’s top dirty donors include DTE Energy ($62,377), CMS Energy ($54,300) and Koch Industries ($28,000), while the PAC and employees of Koch Industries have contributed another $40,000 to Camp’s leadership PAC.

Camp raised the most money out of any Supercommittee member in the third quarter of 2011— bringing in more than $700,000 between July 1 and September 30, including $71,000 from the oil and gas industry. This 3rd quarter haul included money from Chevron PAC, Devon Energy, Koch Industries PAC and Halliburton.

According to Payback Time, Rep. Camp also has significant personal holdings in dirty energy companies worth between $531,217 and $1,181,000, including stock holdings in Chevron, ConocoPhillips, Exxon Mobil, Occidental Petroleum and Shell.

Fortunately Rep. Camp’s blind support for the fossil fuel industry has not gone unnoticed – both labor and taxpayer groups have run television ads in his district decrying his backing of taxpayer bailouts for Big Oil and Big Coal and his votes in favor of dirty energy interests.

And what a voting record it is. In 2011 Camp voted against repealing tax breaks for Big Oil, in favor of the Keystone XL Pipeline, for opening up the Outer Continental Shelf for drilling, and against a Congressional resolution that simply stated that Congress accepts EPA’s finding that climate change is occurring, is caused largely by human activities, and poses significant risks for public health and welfare.

Money may not be able to buy you happiness, but it can certainly buy you a lot of protection. Just ask the fossil fuel industry. And Dave Camp.

Click here to write Dave Camp and demand that the Supercommittee’s recommendations include cuts in fossil fuel subsidies. If you’re near Traverse City or Midland, stop by and let his staff know in person. And while you’re at it pick up the phone and call his DC office at 202-225-3561.