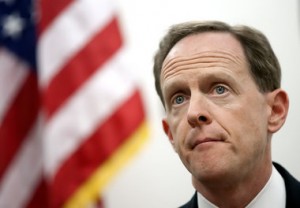 Residents of Cleveland and Buffalo (where I grew up) might be forgiven if they were not terribly excited about the prospect of having oil rigs off the shores of their fair cities. But according to Supercommittee member Senator Pat Toomey of Pennsylvania, drilling for oil in Lake Erie might just be what this country needs to boost its supply of oil!

While President of the ultra-conservative Club for Growth, Sen. Toomey said that government restrictions on offshore oil drilling “border on the criminal”. Toomey, who was supposedly appointed to the Supercommittee because of his policy smarts, also believes that the evidence that climate change is caused by humans is “very much disputed”.

If you’re looking for the source of these decidedly “maverick” ideas look no further than the fossil fuel industry, which has showered Toomey with at least $490,065 in campaign cash since 1999, an amount Toomey has called “trivial”. A darling of the Tea Party, Sen. Toomey’s top dirty energy contributors include Pennsylvania Power and Light ($48,100) and Koch Industries ($19,200).

According to Payback Time, a recently released report from Oil Change International and Public Campaign that looks at ties between the fossil fuel industry and the Supercommittee members, Koch Industries PAC, executives and their spouses gave a total of $26,400 to Sen. Toomey’s election campaign in 2010. Toomey election campaign also benefited from $1.5 million in spending by the U.S. Chamber of Commerce, a corporate trade group that counts the country’s largest fossil fuel companies as members.

The Chamber has said that the Supercommittee “should not single out specific industries or individuals for punishment”, “punishment” in this case presumably referring to ending special treatment for the fossil fuel industry, which is awash in government subsidies and tax breaks. This is being echoed by the American Petroleum Institute, which is currently running television ads in Pennsylvania touting Toomey’s opposition to “job-destroying energy taxes” and encouraging people to call his office to ensure the Committee does not cut government handouts to Big Oil.

Toomey’s former chief of staff Brian Wild now works for Mehlman, Vogel and Castagnetti where his clients include Koch Industries and the American Petroleum Institute. Wild had previously worked as a lobbyist at the US Chamber of Commerce, where he also worked as the Director of the Chamber’s Office of Advocacy and Grassroots Programs.

Not surprisingly, Senator Toomey has consistently voted in favor of dirty energy interests, including voting against eliminating oil and gas tax loopholes, voting for efforts to prohibit the EPA from regulating greenhouse gases, and voting for efforts to open up the outer continental shelf to drilling. As Pennsylvania Democratic spokesman Patrick McKenna put it “Toomey continues to chant drill baby, drill, and then turns around and accepts record amounts of money from Big Oil and gas. We knew Toomey was a rubber stamp for his Wall Street buddies, but now it’s clear he’s the ultimate shill for his Big Oil and gas backers as well.” We couldn’t have said it better ourselves.

Click here to write Pat Toomey and demand that the Supercommittee include cuts in fossil fuel subsidies in its recommendations to Congress. If you’re near one of his many PA offices (Allentown, Erie, Harrisburg, Johnstown, Philadelphia, Pittsburgh or Scranton) stop by and let his staff know in person. While you’re at it pick up the phone and call his DC office at (202) 224-4254.