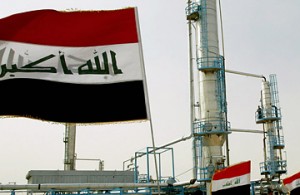 It wasn’t meant to be like this. After nearly a decade of war, chaos and bloodshed, the Iraqi oil industry was meant to be controlled by the bureaucrats and politicians from Baghdad.

But Big Oil obviously has other ideas, and in the good old-fashioned way it will do deals with anyone it can so long as it gets its hand on the black stuff.

So far two of the biggest personalities in the oil game – Exxon’s Rex Tillerson and ex-BP frontman, Tony Hayward – have now done deals with the Kurds in Northern Iraq.

Exxon signed a contract to drill for crude in the Kurdish-controlled north of the country last month on the 18 October.

On Sunday the regional energy minister, Ashti Hawrami, told reporters at an oil conference in Erbil, the Kurdish capital, that Exxon had been awarded six exploration blocks.

It’s not rocket science to see why the big boys are now crawling all over Kurdistan: it is home to about 40 per cent of the Iraqi nation’s 115 billion barrels of reserves, or more oil than there is in the Gulf of Mexico.

Ever since the war, there has been a dispute between the Kurds and Baghdad as to who controls the oil in Kurdistan. For years companies like Exxon stayed away from the region, due to the dispute.

Hussein al-Shahristani said that Baghdad had warned Exxon against pursuing oil deals in Kurdistan, as they are still seen as illegal until Iraq’s controversial Oil Law can be agreed between all the fractious parties.

“The Iraqi government will deal with any company that violates the law the same way it dealt with similar companies before,” said al-Shahristani.

Michael Klare, a professor at Hampshire College and author of “Blood and Oil” told the New York Times it was a shrewd calculated bet by Exxon.

“Both Exxon and the Iraqis understand that Iraq has no hope of reaching its lofty goals of higher oil output without Exxon’s involvement,” Professor Klare said. “Threats to punish the company for investing in the Kurdish area are hollow.”

Businessweek also quotes one risk analyst saying that “Iraq is open for business. If Exxon can advance its efforts in Iraq, then opportunities for all the major oil companies to invest are going to increase significantly over the next several years.”

Businessweek added that Exxon’s “willingness to sign a contract with Kurdish authorities may presage a flood of investment and acquisitions not only in the northern region but all over Iraq as perceptions of political and security risks diminish”.

And it seems the flood might be beginning. Kurdistan is in talks with at least two other major international oil companies, according to Ashti Awrami, the natural resources minister of the Kurdistan Regional Government.

“We have during the past few months been talking to at least three significant companies,” Awrami told the Financial Times.

The paper speculates the companies could include Chevron and ENI.

So the new Iraqi oil rush could be beginning. Watch this space.