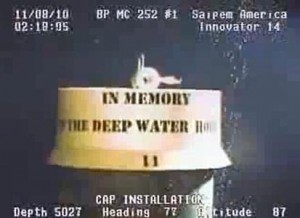 It’s been a good few days for BP. The company’s share price surged 5.1 per cent this morning after it was announced that Anadarko Petroleum will pay $4 billion to settle all claims for last year’s Gulf of Mexico oil spill.

The US-based Anadarko Petroleum was a part-leaseholder of ill-fated Macondo well. As part of the settlement, it will also drop its allegations of gross negligence against BP and give up its 25 per cent interest in the site.

The oil giant said the $4bn cash payment would be put into the $20bn trust the company has established to meet legal claims from the disaster.

“This settlement represents a positive resolution of a significant uncertainty and it resolves the issues among all the leaseholders of the Macondo well,” said Bob Dudley, BP chief executive.

This means that all the parties in the doomed well have now settled their mutual disputes.

Although BP is still embroiled in suits and countersuits with Transocean Ltd., operator of the Deepwater Horizon drilling rig, and Halliburton Co., which was responsible for cementing the well. They are due to go to court early next year.

Whilst the Anadarko settlement is receiving widespread coverage this morning, another event is far more important. The Obama administration has quietly given BP the go-ahead to bid for new drilling rights in the Gulf of Mexico.

The move is a crucial step in the company’s attempts to get back to business as usual after the Deepwater disaster.

“They don’t have a deeply flawed record offshore,” said Michael Bromwich, head of the newly formed Bureau of Safety and Environmental Enforcement. The question is: ‘Do you administer the administrative death penalty based on one incident?’, and we have concluded that’s not appropriate.”

This means that BP could be in the running to acquire acreage in the Gulf when the next lease sale comes up in December.

Naturally environmental groups are outraged. Craig Bennett, director of policy and campaigns at Friends of the Earth said.

“Governments should be administering the death penalty to all deepwater drilling rather than waiting for yet more devastating incidents like the Deepwater Horizon in the Gulf of Mexico or in any other part of the world”.

So BP is no longer a dead company walking. It has been reprieved from death row, which seems incredibly premature as the families of those who dies and thousands affected by the tragedy still await justice.