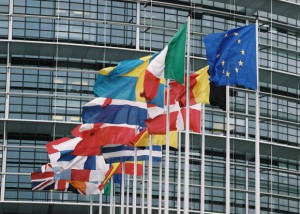 When British Prime Minister, David Cameron staked his reputation on leading “the greenest government ever” he knew that many people would hold him to account to make sure his words translated into action.

People also knew that he had a problem: that vast swathes of the Conservative party are climate sceptic, no more so than the party’s MEPs.

In some quarters in Brussels there is a toxic merging of Euro-sceptic and climate-sceptic belief that veers on the fanatical, where any concept of rational debate on climate change has long flown south.

MEPs such as Roger Helmer have long espoused the sceptic line, and hosted conferences where some of the world’s most prominent sceptics have spoken.

So it comes as to no surprise that Cameron’s Conservative MEPs are threatening to scupper an EU vote on reducing carbon emissions by 30%, even though this is a target agreed by the UK Coalition government.

The stance of the MEPs is said to be deeply “embarrassing” for Cameron.

Tomorrow the European parliament is set to vote on whether to increase the EU’s commitment to a 20 per cent CO2 reduction to a 30% cut by 2020.

But British Tory MEPs look set to oppose the 30% cut. A survey by the Guardian newspaper has found that only one of the 23 MEPs looks set to vote for the measure.

Their leader is Martin Callanan who is a Euro-sceptic MP who is close to Europe’s motor industry. He has a history of trying to water down legislation that would improve the fuel efficiency of motor vehicles.

Callanan argued “Conservative MEPs have always been sceptical of the EU unilaterally increasing its target to 30% without a worldwide agreement … European companies will be unable to compete if the reduction targets are set too high.

He continued: “Many high energy consuming companies are already being forced to relocate to countries outside the EU, which have little or no environmental legislation, putting many Europeans out of work, and an increased target will exacerbate this trend.

“We are also concerned that the higher carbon costs from an increased target will feed through into energy price increases for domestic consumers, who are already facing steep rises.”

All you have to do is look at who has been lobbying Callanan over the last year to see whose opinions matter to him. The last lobbying records available are from July to December 2010. During that time Callanan met, amongst others:

No wonder Labour is criticising the Tory MEPs: “Cameron’s own MEPs prove that the Conservative party is not serious about tackling climate change. The ‘greenest government ever’ is increasingly exposed as all talk, and little action,” argues Meg Hiller, Labour’s Energy Secretary.