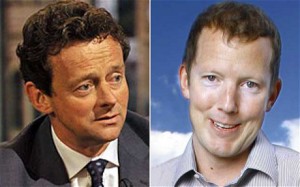 This could be a toxic mix: take Deepwater-disaster man, Tony Hayward; the new coal baron, Nat Rothschild, and bankers Julian Mertherell and Tom Daniel, the former from discredited Goldman Sachs.

Together you have someone who was ultimately responsible for America’s worst ever environmental disaster; someone who obviously does not care about climate change having invested $3 billion to exploit Indonesian coal and someone whose ex-firm is still under investigation for dodgy dealings that were pivotal in the  recent global financial collapse.

Any one of these issues might be a reason for investors to stay away, but no, they flocked to the new company formed by the four men. Together the four formed Vallares, a new oil and gas venture which raised $2.18 billion through a London stock-market listing—a third more than expected.

Hayward said: “I think we’ve all been very encouraged by the support we’ve received. People look at the team that’s been assembled and [see] a very strong board…and a very good operational team with complementary skills.”

Apparently there had been “no pushback at all” against Hayward’s involvement in the business by American investors.

“On both sides of the Atlantic, Tony was regarded as a very popular and extremely high-quality leader of BP,” said Metherell. The acquisition far exceeded expectations, leading to Metherell to describe it as a “great endorsement” of its management.

It is going to be used as a shell company to acquire up to $10 billion upstream oil and gas assets in emerging markets.

The focus will be on upstream oil and gas assets, with production as well as exploration activities. The Vallares management are keeping their proposed investments clse to their chests for the moment, but are currently ruling out “tired, second-hand assets” in the North Sea, in US shale gas, or in politically unstable areas such as Venezuela or central Asia.

Russia looks like a promising bet and the company could even go head to head with BP. “There are numerous examples of successful investments in Russia,” he said. “For all the publicity surrounding TNK-BP, it has been an extraordinarily successful investment for BP shareholders, ” said Rothschild.

Hayward added that Vallares should fill a gap in a London energy market dominated by huge vertically-integrated supermajors including BP and Royal Dutch Shell PLC, and much smaller minnows. “There’s nothing in the £5-£10 billion market-cap space,” he said.

There is also nothing like earning a quick buck.

The deal will see Hayward and Rothschild, Metherell and Daniel make as much as $850 million between them if they successfully acquire $10 billion of assets.

Hayward himself will make tens of millions of dollars.

And that must make many victims of the Deepwater disaster feel distinctly queasy.