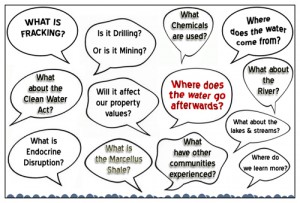 Another day and another review has been ordered into the controversial technique called fracking.

Last week, the Governor of Maryland established the “Marcellus Shale Safe Drilling Initiative”, which will review the safety of the drilling technique for natural gas from the Marcellus Shale in Western Maryland.

“We are also very concerned about an array of issues that have been raised regarding the use of hydraulic fracturing to extract this fuel [gas],” said Governor O’Malley. “Our decisions must be guided by scientific knowledge about the effects of this type of drilling to ensure that we protect public safety and health, groundwater, surface water, and the rural lifestyle and natural resources in Maryland.”

The move met approval from environmental and community groups. Kim Coble, the Maryland Director of the Chesapeake Bay Foundation said: “Fortunately, Maryland is taking the time to ensure drilling occurs only after proper safeguards are in place.”

Coble continued: “Given that our drinking water and other natural resources are at risk, and given Pennsylvania’s checkered experience with fracking, we applaud the Governor for his leadership on this issue. Maryland has the opportunity to get it right.”

The call to “get it right” is now being heard from many different places and politicians.

The British Labour party has now called on the UK government to impose an immediate moratorium on shale gas projects in the country until further research has been undertaken into the controversial technology.

The shadow Energy Minister Huw Irranca-Davies has written to the Conservative Energy Minister Charles Hendry, urging him to enforce a temporary ban on planned shale gas operations, such as the development near Blackpool.

Irranca-Davies said: “There are currently no active shale gas operations in progress in the UK – the Blackpool operation is currently paused – so now is the time for the government to hold its own comprehensive review of shale gas, examining both its possible benefits and downsides”.

Irranca-Davies added that the British government “cannot simply leave the market to decide future energy and environment policy in the UK.” He urged the government to do an urgent review.

However, these calls were dismissed by the Government. A spokesman for the Department of Energy and Climate Change (DECC) said there were already safeguards in place to address the environmental risks associated with fracking.