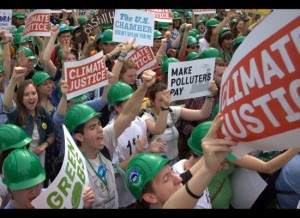 About 10,000 activists marched yesterday in Washington on the “Make Big Polluters Pay”  march.

The march was the culmination of the third “PowerShift” event. Over the weekend activists had heard speeches from the likes of former Vice President Al Gore, and US EPA Administrator Lisa Jackson.

In a speech on Friday night, Gore underlined how Big Oil lobbyists were scuppering political action on climate.

And yesterday they marched in their thousands in their green hats and with their banners with their message for climate justice, clean energy and its time to “Make Big Polluters Pay.”

They demanded that Obama and Congress stand up to Big Polluters, protect the Clean Air Act, and make corporate polluters like BP pay for their pollution.

McKribben, the founder of 350.org wrote about his frustrations with Obama before the event. “Most of us liked Obama a lot….And it’s not that we don’t appreciate what he has done. He’s been far better than George Bush  … We have higher gas mileage standards; the stimulus package funded plenty of green projects; at least some of the most egregious mountaintop removal mining practices are being regulated. All good.”

McKribben continued: “But when the political going got a little tough, Obama didn’t. By all accounts he watched from the sidelines as the cap-and-trade law went down to defeat last summer. He famously allowed vast new leases for offshore oil drilling weeks before the BP explosion.”

He also criticised the Administration for opening up 750 million tonnes of coal and walking away from a climate deal.  “I know that unless he shows some powerful leadership soon we’re going to lose this fight. At which point the question of who’s president will be less important.”

Many marching felt isolated by Obama and his lack of action on climate change, and tackling the power of Big Oil.

“I’m 25 years old and I have a 19 month old son who had to use a breathing machine because the air is so bad in our community,” said Destinee Jones, who traveled to Power Shift from Louisiana with Mossville Energy Action Now. “Youth in Mossville are fighting hard, but we need President Obama to stand with us. Our families should be more important than the profits of the corporations poisoning us.”

Matt Kazinka, a junior environmental studies major at Macalester College in St. Paul, Minn told the New York Times that he’s torn over what he sees as a lack of leadership from Obama on the issue and the reality of a political climate that’s limiting the president

“A part of me feels like maybe it’s just politics, and he’s on our side,” added Abbe Schnibbe, a University of Vermont junior in environmental studies, “but maybe he has had to put things in the back burner in the partisan issues we have as opposed to the issues that we need to address.”

The fallout of the march – and this feeling that Obama’s green agenda has been put on the back burner – is even graphically explored in the Financial Times today , under an article called: “Obama’s green credentials tarnished”.

The paper quotes Eileen Claussen, president of the Pew Center on Global Climate Change, saying: “For a variety of reasons, it didn’t happen. The recession, the fact that the administration’s priorities put it behind a lot of other controversial items like healthcare and financial services reform.  We are now in a world where there is a crying need for an energy policy but I don’t see how we can get there in the next two years.”

And as Steve Kretzmann, Oil Change Director, pointed out yesterday, our energy policy is too often geared up to Big Oil. It was tax day yesterday, so many oil companies got paid. Exxon, for example, despite making billions in profit last year,  paid no taxes and actually received more than $150 million in rebates from the IRS.

Kretzmann said: “Like the other oil companies, Exxon will then take their share of your taxes – totaling at least $10 billion annually in subsidies to the whole industry – and laugh all the way to the Bank.  How does Big Oil get away with this? By investing shrewdly – in the U.S. Congress.  In the last election, oil, gas, and coal interests gave more than $25 million in campaign contributions.   In return they got over $10 billion in government handouts.  That’s a pretty impressive rate of return, and it comes at our expense.”

To find out more go to Dirty Energy Money