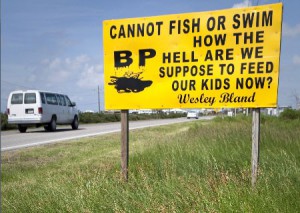 With a haste that many will regard as reckless and a disregard for those who died in the Deepwater accident, BP will resume drilling in the Gulf of Mexico as early as July this year.

So fifteen months after Deepwater, the concept of the disaster being some kind of game-changer that shifted the US towards a clean energy future, has completely evaporated.

Its back to business-as-usual. BP is back in the Gulf of Mexico less than 15 months after 11 workers died leading to the worst offshore oil disaster in American history.

Despite the fact that the ecological, social and economic cost of the disaster is still being calculated, the oilmen will once again be grinning.

But many residents in the Gulf will be aghast that the British company will again be allowed to drill in American waters.

The oil giant has struck a deal with US regulators, under which it will be allowed to drill 10 existing wells that were under way before the accident.

In return, BP has agreed to allow 24-hour access to federal government regulators.

BP has also had to revise it emergency plans.

For groups opposed to further offshore drilling there was one crumb of comfort: The company will not be allowed to drill any new exploration wells. Well, not yet.

And expect that to change over time, too.

BP may seek approval to start exploratory drilling later in the year.

The news over BP comes as Transocean, the drilling company which is also culpable in the disaster, has awarded “safety” bonuses to senior executives for achieving “the best year in safety performance in our company’s history”.

Nine of the workers killed on the Deepwater rig were Transocean employees.

“Notwithstanding the tragic loss of life in the Gulf of Mexico, we achieved an exemplary statistical safety record as measured by our total recordable incident rate and total potential severity rate,” Transocean said.

“As measured by these standards, we recorded the best year in safety performance in our company’s history, which is a reflection on our commitment to achieving an incident-free environment, all the time, everywhere.”

Quite how having nine of your employees die is seen as “accident free”, I’ll never know.