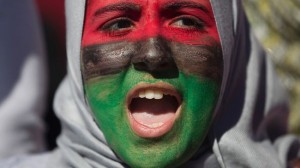 As the West dithers and dallies over whether to support the Libyan rebels, Gaddafi’s forces are rapidly gaining momentum across the country.

This morning the dictator’s troops seemed to have taken the town of Brega after seizing control of the strategic oil town of Ras Lanuf on Saturday.

They now look like they will regroup and head for a showdown at Benghazi, the seat of the country’s fledging revolutionary council.

The head the council is Mustafa Abdel Jalil, a small and softly-spoken lawyer who used to be Gaddafi’s Justice Minister, but who resigned at the beginning of the protests.

Jalil is now arguing that the mismatch between Gaddafi’s heavily armoured troops and the rag-bag rebels could result in “the death of half a million” people.

One way to help stop any impending massacre would be an immediate no-fly zone in the country, but so far the diplomatic efforts have faltered badly. The Arab League has now called on the UN Security Council to impose such a no fly-zone, after the EU failed to agree to call for one last Friday.

But the UN is dithering too, with China and Russia blocking a deal. In part to try and break this deadlock, Mustafa Abdel Jalil, has warned countries that fail to support the uprising they will be denied access to Libya’s vast oil riches if the regime is deposed.

He tells today’s Financial Times that any post-Gaddafi leadership would adjust Libya’s oil policies “according to the positions countries are taking towards Libya in these difficult times”.

Jalil’s comments add a new dimension to the protests sweeping the region. You know that access to oil will be a consideration in how any country or bloc, like the EU, reacts to a crisis. Diplomats will be quietly weighing up the odds behind the scenes, working out whether it is better to back the dictators or the protestors.

Russia may not be bothered by being frozen out of Libyan oil, but China might, so it could be swayed.

But just imagine if the protests in Saudi Arabia grew and the Royal family there reacted with the same threat – back us or you won’t get our oil. For surely the protests would die, as countries would united in protecting the old oil world order.Even if thousands died in the meantime.

And this is what is happening in Libya now. If the West or UN does not intervene, an unknown will die.

“We are bracing for a massacre,” Mohamad Ahmed, a rebel fighter in Libya, is quoted in the Guardian, adding that the fighters “hold the international community responsible” for the fall of cities like Zawiya and for all the deaths that happened. Gaddafi is responsible, but they are partners in crime.”