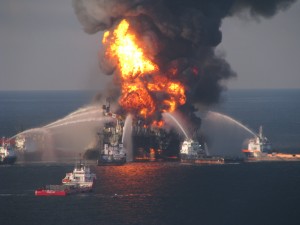 This is a fight that is going to get ugly.

Just as earlier in the year, we learnt a new language about top kills, and blow out preventers, anyone who is following the fall-out from the Deepwater Horizon disaster now has to become an expert in the consistency of cement.

In the wake of new evidence by Obama’s National Commission that Halliburton knew or should have known that the cement they used in drilling the Macondo well was faulty, the blame game between BP and Halliburton has got a whole lot worse.

Halliburton has hit now back against the Commission by stating that it “does believe the foam cement design used on the Macondo well was the cause of the incident.”

Halliburton also repeated that responsibility for the disaster still lies with BP. “BP, as the well owner and operator, decided not to run a cement bond log test even though the appropriate personnel and equipment were on the rig and available to run that test,” Halliburton said in its statement.

The stakes are high for both BP and Halliburton.

BP will be less likely to be found “grossly negligent” if several different companies share the blame for the disaster.

And every bit of bad news is met by market volatility. Halliburton’s share finished 8 per cent yesterday, having at one stage been 16 per cent lower, wiping $2 billion of its market value at one point.

But despite this financial analysts still seem to think that BP is ultimately to blame. The drop in Halliburton’s stock was  “ridiculous” because BP, as operator of the project, had the final say on the job, Capital One Southcoast said this morning.

BP’s other problem is that BP indemnified Halliburton, according to their contract.

As the Atlantic points out in the quote below, COMPANY is BP and CONTRACTOR GROUP is Halliburton:

COMPANY shall save, indemnify, release, defend, and hold harmless CONTRACTOR GROUP against all claims, losses, damages, costs (including legal costs) expenses and liabilities resulting from:
(a) loss or damage to any well or hole (including the cost to re-drill);
(b) blowout, fire, explosion, cratering, or any uncontrolled well condition (including the costs to control a wild well and the removal of debris);

So this could end up in court between the two sides, with BP trying to argue that its indemnity should be waivered as Halliburton messed up and the contractor arguing it was BP’s responsibility at the end of the day.

Meanwhile the bad cement job is only one piece of the jig-saw that could still see BP fined billions of dollars if it is ultimately blamed for the disaster:

“The story of the blowout does not turn solely on the quality of the Macondo cement job,” investigators wrote in a letter to members of the commission.