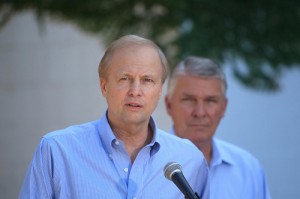 Out with the old. In with the new.

When BP ceremoniously dumped bumbling gaffe-prone Tony Hayward after the Deepwater Horizon oil spill, and ushered in smooth-talking Bob Dudley, it was meant to herald a new era in the troubled giant’s history.

And it is no surprise therefore that Dudley used his first major speech earlier this week at the British CBI to attack the company’s critics for spreading “public fear” and argue BP was not the only one to blame for the disaster.

In doing so he sounded exactly like his predecessor.

He lambasted the near-blanket media coverage and the “great rush to judgment by a fair number of observers before the full facts could possibly be known, even from some in our industry.”

Notice that stinging attack against some of Bob’s own. It’s alright to criticise from outside, but not from inside the industry.

Although Dudley said he was shocked by the human tragedy and its environmental consequences, he also attacked the “protracted media and political firestorm it generated in the months leading up to the elections, both in Washington and the states of the Gulf of Mexico.

Its much easier to blame the media and politicians than yourself.

Although Dudley said that BP had learnt lessons from the disaster – one lesson the oil giant has not learnt is that deepwater drilling isn’t great for the environment.

The company intends to keep drilling in deep water in the Gulf of Mexico despite the damage to its reputation. He said BP is “one of only a handful of companies with the financial and technological strengths to undertake development projects in these difficult geographies, and it can be done safely.”

The new CEO also said it wasn’t the only one to blame for the disaster.

It was a “sequence of interlinked failures involving a number of companies” that “led to the explosion and fire. It was a combination of equipment and system failures,” argued Dudley.

Dudley’s speech didn’t go down too well in some quarters in Washington. “The American people were told that as CEO, Bob Dudley would change BP’s attitudes and practices,” Rep. Edward Markey (D., Mass.) told the Wall Street Journal. “Yet BP is continuing to point the finger at everyone but themselves. Since this disaster began, BP has stood for ‘Blame Passed.'”

And the former EPA Administrator William Reilly, the co-chair of an independent oil spill commission investigating the rig explosion, countered that BP shouldn’t downplay the significance of “what occurred and what happened on their watch and what was their responsibility to prevent.”

One commentator yesterday on FuelFix.com, the energy blog linked to the Houston Chronicle, was not impressed either: “we see the new CEO following a similar pattern to his predecessors in which contrition and talk of responsibility gives way to denial, and change remains elusive.”