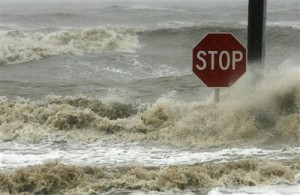 It’s a region that has seen its fair share of disasters in recent years. Hurricane Katrina. The BP oil spill to name the big two.

But the Gulf Coast cumulative losses of $350 billion by 2030 if it fails to address climate change, according to a new $4 million study.

And the warning comes not from a green activist, but in a report from the energy giant, Entergy with research undertaken by Swiss insurance giant, Swiss Re and McKinsey and Co, a New York based research firm.

The three main risks to the region — hurricanes, subsidence and rising sea level — are only likely to increase in coming decades.

Texas, Louisiana, Mississippi and Alabama face annual losses of two to three percent of GDP by 2030 if they fail to act.

This is bad news for the oil and gas industry and many offshore installations.

On average, the Gulf region already suffers losses of about $14 billion a year, the Entergy study found.

But over the next 20 years, losses are expected to rise to between $18 billion and $23 billion a year, depending on the severity of climate change.

That means that economic losses will increase by 50-65 percent by 2030, unless something drastic is done.

Looking ahead even further, the study said losses could increase to between $26 billion and $40 billion a year after 2030 if climate change worsens.

Even without the threat of climate change, “the Gulf Coast faces an increase in risks from natural hazards going forward,” the study said, because economic growth in risk-prone areas and land subsidence are expected to increase.

Already 25 square miles of the Louisiana Delta erodes every year.

“Sitting here doing nothing is not a plan that is acceptable,” said Wayne Leonard, the chairman and CEO of Entergy.

“It’s a road map for us to adapt to a world we don’t really want to be living in, but we really may not have a choice,” Leonard said.

Leonard called the report “a call to arms”.