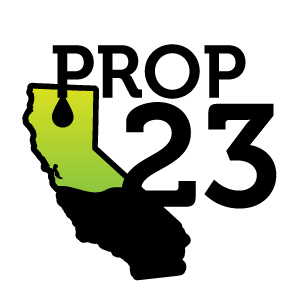 For those who may not have heard yet, there’s a huge and historic battle brewing in California.  Proposition 23, if passed would suspend the California Global Warming Act of 2006 (AB 32) which requires that greenhouse gas emissions in the state be cut to 1990 levels by 2020.

At least 92% of contributions being pumped into California’s Proposition 23 are from energy companies that would be regulated by the energy and climate legislation they are trying to overturn. Much of the money has been used to collect the signatures to get Proposition 23 on the ballot, and to fund research that supposedly proves that clean energy would cost jobs.
Oil Change International has produced an interactive funding map that allows you to investigate exactly which oil, gas, and coal companies are funding this initiative. Some interesting things to note as you explore the interactive map: 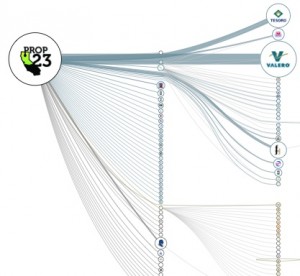 The Adam Smith Foundation: The foundation was a relatively minor player in Missouri conservative politics until this year’s massive contribution in California. We don’t know where the money came from, because the Adam Smith Foundation is a 501c4 group, and doesn’t have to disclose its contributors. But John Elliott, the foundation’s president, runs a design firm that has many coal power industry clients. Could there be a connection?

Click on the companies and links on the map to learn more.