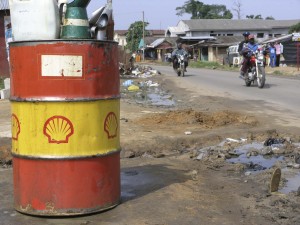 Nigeria was once Shell’s jewel in its crown. But for so long it has been the thorn in its side.

Whether its pollution, collusion, corruption, bribery or false accounting, Shell’s Nigerian subsidiary has been accused of them all.

So many of the group’s problems keep coming back to Nigeria. The company settled out of court last year in the landmark Wiwa versus Shell case.

The company is court in the Netherlands accused of pollution.

Now Shell is apparently “close” to settling foreign-bribery charges stemming from a three-year U.S. investigation, according to the Wall Street Journal.

The case is centred around the Swiss shipping and logistics Panalpina Group, that operates in over 80 countries.

Panalpina is being investigated into whether it paid officials in countries such as Nigeria, Saudi Arabia, Algeria and Kazakhstan to “expedite services, such as clearing drilling rigs and other equipment through customs”, according to the Journal.

The investigation is being carried out by the U.S. Justice Department and the Securities and Exchange Commission has extended to many of Panalpina’s customers, including Shell.

Shell is expected to pay around $30 million in penalties to settle charges stemming from its use of Panalpina as an agent in Nigeria.

How much Shell knew about what was going on is unclear, but normally you don’t pay $30 million for nothing.

Let’s not forget that this is not the first time that Shell – or those close to the company – have faced bribery allegations in Nigeria.

For years the Bonny LNG plant – in which Shell is a major shareholder – has been the subject to investigations by numerous law enforcement and federal agencies over corruption and bribery.

Last year one of the contractors that built the plant – Kellogg Brown & Root LLC paid a $400 million fine, and pleaded guilty for “its participation in a decade-long scheme to bribe Nigerian government officials to obtain engineering, procurement and construction (EPC) contracts,” for the LNG plant.

Leading African experts have said that, although Shell was not involved in the bribery itself, it was “negligent” because it had not found out what was going on.

“You award a contract to a consortium and the consortium behaves in a corrupt manner. Shell has an absolute interest  in ensuring the integrity of the project and they clearly haven’t done that”, argued Patrick Smith, the editor of Africa Confidential in 2005.

A decade earlier, in the nineties the oil giant also had to deny media reports that it had uncovered a “black hole of corruption” in its Nigeria operations.