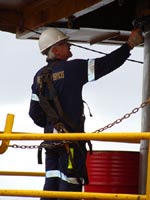 Ask anyone who works say as a teacher about being inspected by government officials and they say that it is the surprise inspections that matter.

If you have weeks of notice about an inspection you by its very nature have to make sure everything is in order.  The kids are all behaving themselves at the crucial moment.

Regulators routinely use surprise inspections in such operations as airplane maintenance or chemical plants.  It should be the same for the oil industry – where the inherent health and safety risks are much, much greater than say teaching.

Surely the only way to inspect is unannounced? You give a company notice and once again, they have time to make sure the logs are in order, the maintenance is up to date and everything is ship-shape.

But in the months and years before Deepwater this was not happening. According to federal data analyzed by The Wall Street Journal, surprise inspections of deepwater drilling rigs in the Gulf of Mexico dwindled to only about three a year over the past decade.

And since 2004 federal authorities haven’t made a single surprise inspection on any of the 50 or so deepwater natural gas and oil production platforms in the Gulf. This is despite a law requiring periodic unannounced inspections.

A analysis of inspection data from 2000 through July 2010 showed there were significantly reduced unannounced inspections in the Gulf’s deep waters.

In 2000, about one in nine inspections of deepwater facilities were unannounced, by 2009, that rate had dropped to about one in 80.

At the same time, the number of deepwater wells had doubled.

Its not rocket science, but if you don’t look you won’t find.

And the only way to find the truth of what is happening on board a rig is unannounced. Otherwise the inspection is compromised.

That is why the industry always wanted inspections to be announced.

And inspectors often felt pressurised to notify companies like Shell before traveling to its offshore facilities.

“You’re more apt to see what actual operations are with a surprise inspection,” Perry Jennings, who heads the union local that represents federal offshore inspectors tells the paper. “And if something’s going on that’s inappropriate, that’s the best time to catch it.”

That is why a recent survey concluded that 90% of inspectors said there was a “critical need for more unannounced inspections.”

But this was not happening.

The last inspection on the ill-fated Deepwater Horizon rig was some three weeks before the disaster. The visit only last two hours.

I can tell you something. You might be able to inspect a classroom in two hours, but not a rig.

And the visit was announced.

The bottom line is that surprise inspections were “not what anybody wanted,” Elmer P. Danenberger III, the longtime head of the agency’s offshore regulatory programs who retired in December, tells the paper.

Interior Secretary Kenneth Salazar has promised extensive reforms, and a recent report said the agency’s policy about surprise inspections must be clarified.

It’s always dangerous to peer into the crystal ball but I bet you this, in the short-term there will be political pressure for more unannounced inspections, but slowly and surely over time, the industry will press for the old ways to return.

And that will mean announced inspections.

Whether the Obama Administration has to be backbone to stick up to them remains to be seen.