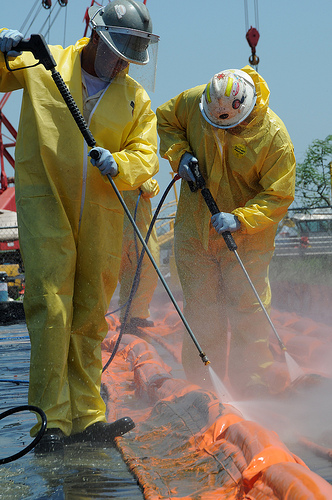 Back at the height of the BP oil spill, President Obama asked a commission to find out “what worked and didn’t” in the government’s response to the disaster.

Well the bad news for Obama is that much didn’t work, making grim reading for the President and forcing the White House to hit back at some of the more serious accusations.

So we have a spat on our hands. What we know is that this looks like a row that isn’t going to die down any time soon.

However, amongst the political row, the serious warning by the Commission of allowing drilling in the Arctic should not be ignored.

But firstly, if you are a President, one of the last things you want is to be hit by accusations of incompetence, as mud can stick.

The government’s response was also marred by spill was marked by conflicts between the agencies, who differed over how much to tell the public, ending up with the Administration effectively blocking efforts by government scientists to tell the public just how bad the situation was.

One example is where the Office of Management and Budget denied a request by the National Oceanic and Atmospheric Administration to release “worst-case discharge figures’’, meaning that it would be weeks later before the dire dimensions of the spill finally became public.

It also meant that there was less sense of urgency about the spill response.

“The national response may have benefited early on from a greater sense of urgency, which public discussion of worst-case discharge figures may have generated.’’

The panel criticised just how unprepared the government and its agencies were to respond to such as disaster. Take the issue of dispersants, an issue covered regularly on this blog.

The Commission concludes that “The government was not adequately prepared for the use of dispersants to address such a large oil spill.”

The EPA fell well short of what was required:

“Notwithstanding the National Contingency Plan’s express requirements for planning regarding the use of dispersants, including pre-authorization to deal with emergencies, EPA clearly did not anticipate the potential demands of an oil spill of the kind the nation faced after the Macondo well explosion.”

Nor does NOAA come off much better:

“Nor had NOAA adequately planned for such an event … NOAA had also not previously evaluated the potential impacts of voluminous and extended use of dispersants on marine life and the nation’s fisheries.”

Because no one had planned for such an event they basically did not have the right information to hand when it came to whether to use or not use dispersants.

“Because federal agencies had failed to plan adequately, they did not possess the scientific information that officials most certainly would have wanted to guide their choices.”

The panel does not make happy reading for Carol Browner, director of the White House Office of Energy and Climate Change Policy, who misrepresented the findings of a federal analysis of where the oil went and incorrectly portrayed it as a scientific assessment that was peer-reviewed by inside and outside experts.

For example, Browner said: “I think it’s also important to note that our scientists have done an initial assessment, and more than three-quarters of the oil is gone”.

But the analysis had crucially never said that it was “gone”, rather it was dispersed, dissolved or evaporated — meaning it could still be there.

Independent scientists who have been critical of the Government’s response feel vindicated.

Florida State University professor Ian MacDonald, who has repeatedly clashed with NOAA and the Coast Guard over the size of the spill. He says that from the beginning, there was “a contradiction between discoveries and concerns by academic scientists and statements by NOAA.”

The report shows “the political process was in charge and science really does not have the role that was touted,” adds Christopher D’Elia, dean of environmental studies at Louisiana State University.

And when politics is in charge over science you always know there will be problems.

Finally, the Commission issues a warning over Shell’s plans for the Arctic, which as I said earlier, should not be ignored.

The Commission argues “A spill or blowout in the Chukchi Sea area would be more difficult to access, let alone contain and clean up” than in the Gulf of Mexico.

It warns that “once the winter freeze occurs, any spill would be impossible to access for purposes of response”.

And if you can’t get access to it, you can’t clean it up.

And if you can’t clean something up, you shouldn’t be allowed to drill there. Period.