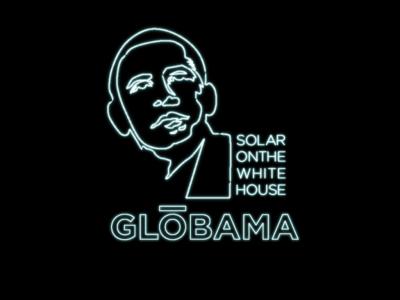 So its not only Obama’s war machine that is going green.

So is the White House.

In recent days some in the press have compared Obama to Jimmy Carter, saying their presidencies are similar in the way they failed to live up to expectations.

But there is another way that Obama is replicating Carter – by reinstalling solar on the White House roof.

Carter put 32 solar panels on the roof in the late 1970s, but President Ronald Reagan removed them in 1986.

Now the White House will get between 20 and 50 panels as well as a solar water heater.

The announcement by the White House comes in response to a campaign by California-based Sungevity called Solar on the White House and another by 350.org founder Bill McKibben who have been trying to get Obama to reinstall solar panels for months.

“If it has anything like the effect of the White House garden, it could be a trigger for a wave of solar installations across the country and around the world,” he said.

“This is a great day for the clean energy movement and Sungevity is glad to have ignited further awareness around the idea that we can all make a difference,” added Danny Kennedy, Sungevity founder.

He continued: “Residential solar power is now accessible and affordable – we imagine a day when every home in America harnesses the power of the sun. Congratulations to the 50,000 people who signed the petition as well as anyone who has already committed to clean energy.”

Indeed Sungevity has offered free residential solar systems not only to the Obama’s, but to other world leaders. The first leader to accept was President Mohamed Nasheed of the Maldives, who will be installing solar panels today.

And it is not just on the White House where the solar revolution is quickening a pace. Proposals for the first large solar power plants ever built on federal lands won final approval yesterday from Interior Secretary Ken Salazar.

Both plants are in the California desert under a fast-track program that dovetails with the state’s own aggressive effort to push development of solar, wind and geothermal power.

Salazar is expected to sign off on perhaps five more projects this year and the combined long-term output of all the plants would be four times that of the first two. “It’s our expectation we will see thousands of megawatts of solar energy sprouting on public lands.”

Back in 1979, Carter said looking at his solar panels:

“In the year 2000 this solar water heater behind me will still be here supplying cheap, efficient energy. A generation from now this solar heater can either be a curiosity, a museum piece, an example of a road not taken, or it can be just a small part of one the greatest and most exciting adventures ever undertaken by the American people.”

Maybe the adventure is finally beginning.